The new Hong Kong flag was officially adopted on July 1, 1997.

A stylish white, five-petal bauhinia flower is centered on a red field. The flower symbolizes harmony while the red coloring is a representation of nationalism for the Chinese people. 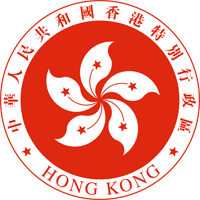 The Regional Emblem of the Hong Kong Special Administrative Region of the People's Republic of China was adopted along with the flag in 1997.

Hong Kong's emblem features elements from the regional flag, and bears the official name in a white, outer ring.