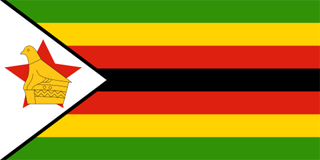 The flag of Zimbabwe was adopted on April 18, 1980. Green, yellow, red and black are the official colors of the ZANU PF, and Pan-Africanism; the white triangle represents peace, and its black edge represents the country's new leaders.

The Soapstone Bird is the national emblem, and the red star symbolizes an international outlook. 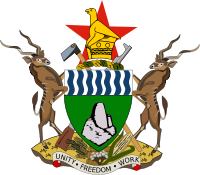 Zimbabwe's coat of arms features two kudus standing on top of a mound composed of wheat, cotton and maize. The kudus support a green shield displaying 14 waves of blue and white (a symbol of Victoria Falls and prosperity) with the ancient Kingdom of Great Zimbabwe represented at the base.

Transposed from the national flag is the Soapstone Bird and red star symbolizing an international outlook.