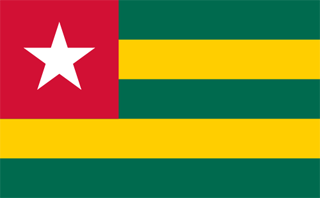 The flag of Togo was officially adopted on April 27, 1960. It features a white "Star of Hope" on a field of red, and the red of that field is said to represent the blood shed by countrymen during the internal struggle for independence. 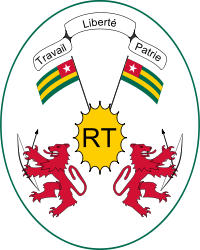 The emblem of Togo, adopted March 14, 1962, is composed of two red lions (a symbol of bravery) each holding onto a bow and arrow that represents the call for citizens to be active in defense of freedom.

A golden shield bearing the letters RT (République Togolaise) rests between the lions, and the national motto is displayed on a ribbon above.