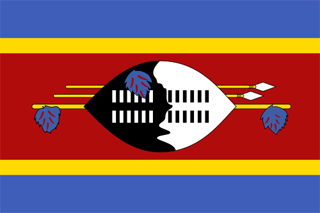 The flag of Swaziland was officially adopted on October 30, 1967. It's modeled after a flag given to the Swazi Pioneer Corps by King Sobhuza II in 1941.

The centered regiment shield features a supporting staff with hanging tassels of feathers. Two Swazi ceremonial spears are placed above the staff.

A crown of feathers rests on top of the shield, and the national motto Siyinqaba ("We are the fortress") is displayed on a ribbon below.

What Is The Definition Of A Dynasty?