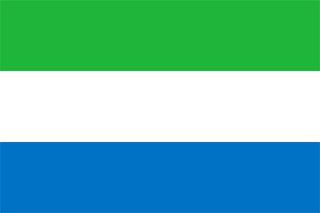 The flag of Sierra Leone was officially adopted on April 27, 1961.

The green is symbolic of the agricultural and natural resources of the country, while the white represents justice, and the blue is symbolic of Freetown's harbor. 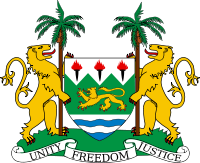 The coat of arms of Sierra Leone is composed of two lions rampant supporting a coconut tree and shield. Within the shield are three torches, representing peace and dignity, and a third lion against green mountains, a symbol of the Lion Mountains.

The national motto is displayed on a ribbon below.