The Sao Tome and Principe flag was officially adopted in 1975, shortly after gaining its independence from Portugal.

The red triangle symbolizes that hard-fought struggle for independence, and the two black stars represent the country's two main islands. The green, yellow and black are the Pan-African colors. 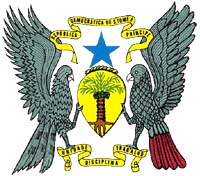 The coat of arms of Sao Tome and Principe displays a falcon on the left and parrot on the right holding a shield. A blue star rests above the shield and the national motto ("Unity, discipline, work") is displayed on a ribbon below.