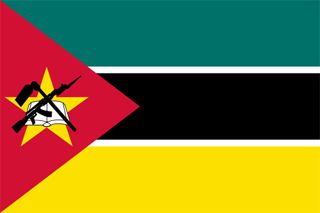 The Mozambique flag was officially adopted in May 1983.

Green is symbolic of the fertile land, red the struggle for independence, yellow the country's mineral resources, white signifies peace and black represents the African continent. The official emblem of Mozambique is displayed on the red triangle. 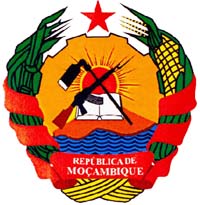 The national emblem of Mozambique was adopted in 1990, and is composed of a gear wheel surrounded by corn stalks and sugarcane.

An AK-47 and hoe are crossed over a red sun and blue waves, representing defense, agriculture and the building of new life. The red star above symbolizes the spirit of international solidarity.