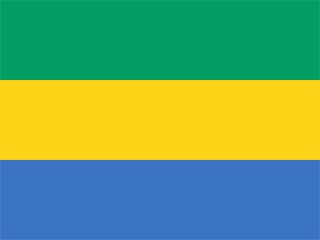 The flag of Gabon was officially adopted on August 9, 1960. The yellow and green are said to represent natural resources, and blue the sea. 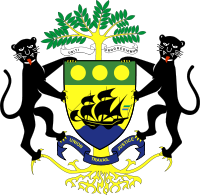 Gabon's coat of arms was adopted on July 15, 1963, and is composed of two panthers supporting a shield. The okoume tree is a symbol of timber trade, the panthers are for vigilance and courage, and the image on the shield represents moving towards a brighter future.

The ribbon below the shield displays the national motto in French, "Union, Travail, Justice" ("Union, Work, Justice"); the ribbon above the shield reads in Latin: "Uniti Progrediemur" ("We shall go forward united").