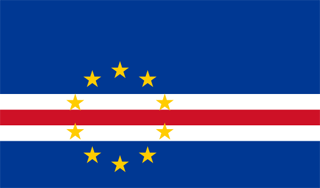 The Cape Verde flag was officially adopted on February 25, 1992.

The gold stars represent the (10) islands of the country. The dark blue represents the Atlantic Ocean and the red stripe - the road to economic progress. 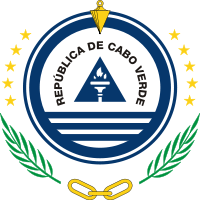 The national emblem of Cape Verde was adopted in 1992, and features a torch and triangle within a circle, which are symbols of freedom and national unity. The ten stars on either side of the circle represent the islands, and the plumbbob at the top is a symbol of righteousness.