Although tiger breeding and commercial trade in tigers is legal throughout the EU, the exact number of tigers in captivity is largely unknown to the relevant authorities.

According to a recent report by Four Paws International, aptly entitled 'Europe's Second Class Tigers,' there is a shocking discrepancy in the data pertaining to Europe's captive tiger population. Reliable records of their numbers, locations, movements, and trade are sparse. There is little information as to how they are treated during their lifetime and how or why they die.

This article tells the story of these tigers - a population of 'commodified' captive tigers bred and traded across the European Union (EU) nations to serve as feed to human demands for entertainment. With the help of Kieran Harkin, International Head of Programme, Wild Animals in Trade, FOUR PAWS International, World Atlas explores the lives of these tigers in Europe and tells you why all is not well with them.

The tiger has always intrigued humans. Its majestic appearance and perfect predatory skills have inspired the awe. Throughout history and across many cultures, the tiger is believed to represent strength, courage, dignity, and positivity. Some cultures also worship the tiger.

In the wilds of Asia where the tiger roams free in dense forests, it is feared and revered and most importantly protected by stringent laws. The implementation of these laws, however, sometimes becomes questionable. Still, these wild tigers are valued by the nations where they occur and those violating the legislations protecting them are answerable to the courts of law. If found guilty, strict punishments often follow. In countries like India and Bangladesh, the tiger even reigns supreme as the national animal, a symbol of national pride.

The case of captive tigers owned privately by individuals and organizations across Europe and North America, however, is a completely different story. While the controversial Tiger King of Netflix stirred up discussions the world over regarding the sorry state of America's tigers, the picture is no less gruesome for Europe's captive tiger population. Here are the highlights from the report by Four Paws International proving the same: 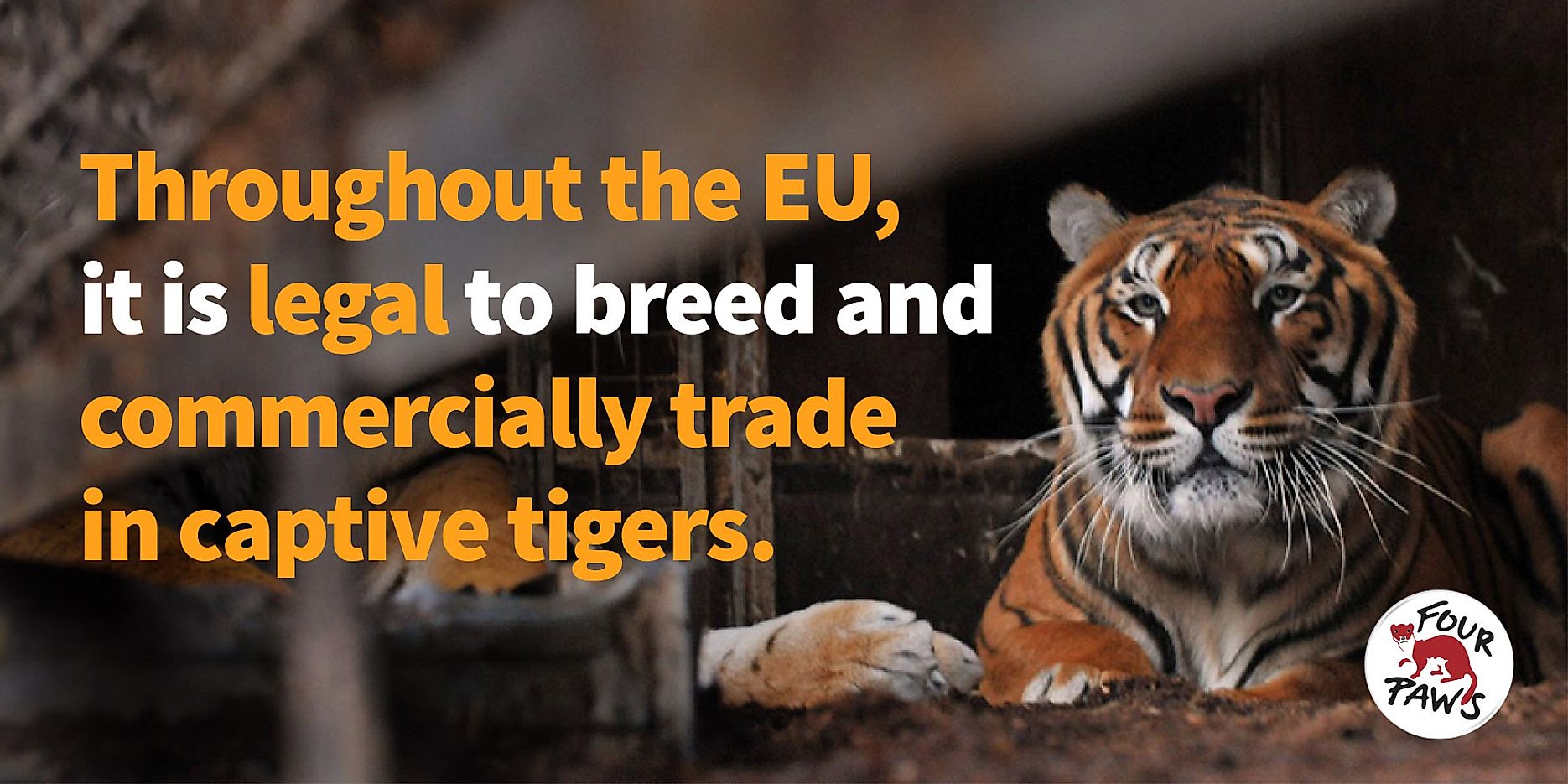 "Very little was known before we started our campaign and subsequent research. Frankly speaking, there is still a serious lack of knowledge and awareness on the issue among decision-makers across all EU member states. Most people and stakeholders including NGOs and political stakeholders would assume the majority of captive tigers are in zoos and circuses. The common belief is that a lucrative commercial trade in tigers and illegal dealings in tiger parts are only present in countries far from the European Union (China, SE Asia, US and South Africa)," Mr. Harkin informed World Atlas.

"I started researching the subject because I noticed serious discrepancies in available information across multiple connected issues. They all pointed towards a commercial trade beyond the scale that anyone had thought of and in some cases, overlapping with illegal activity. Examples include circus tigers having cubs and then the cubs disappearing from the public eye. A circus would offer their tiger cubs for the public to see in one place but when they moved on to their next destination, they would no longer have cubs. This was also seen in adult tigers where it was obvious that circuses had different tigers and the number of tigers changed between the locations where they stopped. I saw this as a clear loophole that allowed for the unchecked movement of tigers and tiger cubs. This situation also coincided with an increase (at least in what I noted) in tiger petting facilities in Europe following the trends in Asia where tiger cub petting and photographing the interaction constitutes a very lucrative industry. I knew that if this was happening in Europe then it would mean that a steady supply of cubs would become necessary to support this growing industry. This demand would give rise to issues that we have already seen in Asia," continued Mr. Harkin.

Harkin and his team at Four Paws then started looking at the trade data which documents the legal trade in live tigers from Europe to Asian countries where there is a demand for tiger parts as well as the presence of tiger farms. By following the trade links in the destination countries and with the help of covert work, the team uncovered some alarming facts.

"We found that there were dealers in countries like Vietnam that were actively offering European tigers to local breeders and traders. In one case we documented European tigers being imported to Vietnam and then sold to the wife of a convicted tiger trafficker. We then inspected the illegal trade data and what seizures were being documented in the EU. This data is not on the public domain, but we could access the information. Seeing the data, we immediately became concerned about the scale of tiger parts and derivatives being seized within the EU. There were over 8,000 such cases in the 10-year period we looked at," revealed Mr. Harkin.

Next, the investigative work by Four Paws evolved to pinning down the biggest players, those with most captive tigers and engaged in active breeding and trading of the same. It soon became apparent to Harkin and his team how these people were linked to each other and to traders in other parts of the world.

"It became clear to us from the numerous missing cases of information, lack of data, and seizures that Europe also had a flourishing illegal trade in these big cats and their parts. On several occasions, tiger parts and derivates were confiscated by the Czech authorities at Prague airport including the seizure of a dead tiger and equipment to process tigers into traditional medicine i.e. tiger bone glue. In December 2019, another incident of illegal tiger trade was documented when authorities stopped a truck at the Poland-Belarus border in Koroszczyn. It was carrying 10 tigers. All of these big cats were in very poor condition. Unfortunately, one of these tigers succumbed to the trauma and died. The rest were confiscated by Polish authorities. This incident was a clear case of illegal transport where the health of the tigers was of no concern to the traffickers. Possibly they were to be killed for their body parts," mentioned Mr. Harkin.

While the illegal traders and breeders are certainly to blame, it is the public demand that sustains the gruesome captive tiger breeding and trading industry in the continent. Mr. Harkin explained how tigers are abused by the entertainment and tourism industry throughout Europe:

The Four Paws report has also raised concerns about the harsh impacts of Europe's captive tiger and tiger parts trade on the wild tiger conservation in Asia. They recommend a ban on the commercial tiger trade to stop breeders and traders profiting from tigers across Europe. They believe this ban will directly contribute to the recovery of wild tiger populations across the world. Mr. Harkin explained further:

"There will be less poaching and less demand for tiger parts as the market will be wiped out. Enforcement authorities will also be able to do their job more easily as they will know that if the trade involves tigers, then it is illegal. These changes will significantly lift the pressure on wild tiger populations allowing them to grow," said Mr. Harkin.

Mr. Harkin also reminds us that although The Convention of International Trade in Endangered Species (CITES) has agreed through Decision 14.69 that tigers should not be bred for commercial trade, the practice still exists and constitutes a massive industry. Thus, it means that many countries contravene the convention. Secondly, wild tigers and captive tigers are granted varying degrees of protection even though both stimulate the growth and survival of the market for tigers and their parts.

According to Mr. Harkin: "The captive tiger trade exerts pressure on the species as a whole due to its commercial significance and also puts a higher value on wild tigers due to their rarity. The poaching of wild tigers will never cease whilst we continue to have a profitable trade in tigers and their parts. The only answer to this problem is to end the commercial trade in captive tigers."