Tonga is an archipelago of 176 islands (36 inhabited) located in the South Pacific Ocean. The three largest islands are Tongatapu, Ha'apai, and Vava'u, with Tongatapu being the most populated.

Due to its location within the Pacific Ring of Fire, Tonga experiences relatively frequent volcanic activity, with its last eruption occurring in 2009, near the island of Hunga Tonga - approximately 6.8 miles (11 km) north of the capital city of Tongatapu.

Tonga's western islands make up the Volcanic Arch, and are therefore volcanic in origin, having been formed from heated materials that rose to the surface of the ocean.

The eastern Tongan islands sit above the Tonga ridge, running parallel to the Volcanic Arch, and were formed from elevated limestone and uplifted coral formations. These islands are not volcanic.

Located east of Tonga, in the depths of the ocean, is the Tonga Trench - one of the deepest parts of the Pacific. Its deepest point, known as the Horizon Deep, plunges 35,702 ft. (10,882 m) below the surface of the water.

There are no significant rivers within the Tonga archipelago, however the largest lake is located on the island of Tofua, and is a steaming hot volcano crater with a depth of 1,600 ft. (500 m). 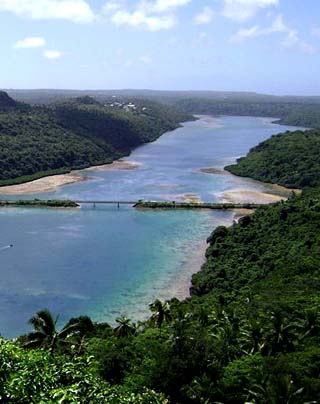 The landscape of Tonga