Comprised of two large islands (separated by the Cook Strait), as well as Stewart Island, hundreds of coastal islands and many regional islands, New Zealand is a country of snowcapped mountains and scenic landscapes - north to south.

Positioned along the Ring of Fire, the Southern Alps (and it's many ranges) extend through the western portions of South Island. The country's highest point, Mount Cook (Aoraki) is located there, as well as over 350 glaciers and a wide assortment of national parks. Mount Cook rises to 12,316 feet (3,754 m).

Throughout the Southern Alps an additional 19 mountains rise above 10,000 ft (3,000 m). Along the western side of these massive peaks there's a narrow strip of coastline. Along their eastern flank, the mountains slope into a region of rolling hills and plains, drained by glacier-fed rivers.

In the far south, within the confines of Fiordland National Park, a jagged coastline of fjords, inlets and bays front the Tasman Sea. Milford Sound, located within the park, is surrounded by sheer rock faces that rise 3,937 feet (1,200 meters) or more on either side. It's widely considered New Zealand's top travel destination.

The mountains found on North Island are volcanic in nature, and many remain quite active. On the island's southwestern corner, Mount Taranaki (or Mt. Egmont) rises to 8,261 ft (2,518 m).

Broad coastal plains ring much of North Island, and along its central western coastline, limestone caves, caverns and underground rivers are common. Along the northeastern coastline, the Bay of Islands is famous for its 125 (or more) scenic islands and secluded coves.

With Mount Maunganui guarding the entrance, and nearly 62 miles (100 km) of white sand, the Bay of Plenty is New Zealand's premier beach area.

Large areas of temperate rain forests are found along the western shore of South Island, and across much of New Zealand's North Island.

Occupying an extinct volcanic crate, the country's largest lake is Lake Taupo on North Island. The country's longest river, the Waikato, flows north from Lake Taupo through Hamilton, and on into the Tasman Sea.

Lake Te Anau is the largest lake on South Island. The Clutha River is that island's longest river, and like most rivers here, it originates in a Southern Alps glacial lake.

Geography and Landforms of Oceania 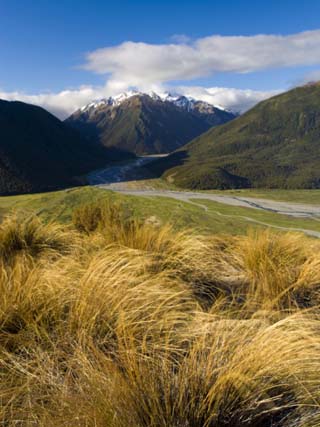 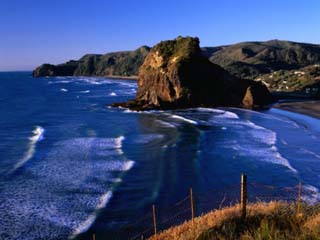