Volcanoes are a phenomenon that piques the interest of geologists and everyday people alike. Often, these mysterious geological features seem to erupt out of nowhere, like Mount St. Helens which sat quiet for more than a century until it exploded on May 18, 1980, spewing lava that melted nearby glaciers, causing a mudslide that killed 57 people. A volcano erupts when thick magma is forced to its surface, causing a build up of pressure that is released through an explosion.

Think of a volcano like the chimney of furnace or fireplace. There’s an energy source below and volcanoes are the vents that allow smoke out of the house.

The burning firewood, in this case, is the mantle, the layer between the Earth’s surface and its core. With the pressure of the 18 km thick outer surface (crust) of the planet pushing in, the center of the earth is incredibly hot. It is so hot, rock in the mantle and the core are melted into a liquid form called magma.

In some places of the crust, there are weak spots, places that are thinner than others. These are where volcanoes occur.

In the mantle below, about 1,800 miles thick, gases can build up, and create outward pressure. Combine that with the friction of the earth's moving tectonic plates, and sometimes the crust can no longer contain all that hot material. With great force, the magma and gas is forced out of the earth in a tremendous explosion. That’s what a volcanic eruption is.

More than 80 percent of the world’s surface, both above and below sea level, has volcanic origins, according to the U.S. Geological Survey, the American government agency that studies the Earth and its resources. Emissions from the hotter inner layers of the earth, both gaseous and liquid, created all the oceans and mountains we see on maps today. They will also continue to do this into the future.

The Power of Volcanoes

Lets get the bad out of the way.

Remember the aforementioned Mount St. Helens in Washington state? A mountain blown in half and the grisly numbers. 57 dead, more than $1 billion in property damage. That happened in 1980, but to this day, people that saw it on TV recount the amazing power that that was demonstrated.

Lava (the name for magma once it's out of the Earth), and gas does not discriminate. If you’re in the way, as Mount St. Helens lodge caretaker Harry Truman was — he refused to evacuate — chances of death are great. Truman’s body was never found.

If the lava doesn’t get you, the ash can. It is a common source of respiratory problems in the aftermath of a volcanic disaster.

An eruption, often accompanied by an earthquake, can cause tsunamis as well, a series of large waves that can devastate a coastline, causing more death for the unprepared. The moral of the story: take precautions when there is even a hint of a volcanic eruption.

Now for the good. The volcanic materials produced during an eruption can create fertile soils conducive to agriculture. On the Big Island of Hawaii, Mauna Loa, the world’s largest active volcano above sea level, is surrounded by vast plots of land that produce some of the world’s best coffee.

In Italy, the nutrient-rich surface around Mount Vesuvius near Naples is the result of two big eruptions, 12,000 and 35,000 years ago, according to research at the University of California-Santa Barbara. This region of Italy is ripe for tomato growing, something most people are familiar with thanks to the delicious sauces the country’s chefs feature in some of their most popular dishes.

Aside from Mt. St. Helens, other volcanoes have caused major disruptions to day-to-day life, and even some damage on a global scale.

On June 11, 1991, Mt. Pinatubo in the Philippines erupted and killed 847 people, directly due to the eruption and the ash fall. The eruption did more than affect the neighboring towns and cities. The amount of gas and ash emitted into the atmosphere actually caused the global temperature to drop by 0.5º C over the following year. As well, a haze of acid rain was spread across the planet.

In April 2010, Eyjafjallajökull in Iceland erupted with very little immediate dramatic effect, but caused a global transportation disruption. Due to major amounts of ash and smoke being emitted into the atmosphere, planes were unable to cross through the ash cloud. For 6 days from April 15th to April 20th, most European flights and transatlantic flights had to be delayed or canceled, causing a loss of $1.7 billion USD.

What Kind of Volcanoes are There? 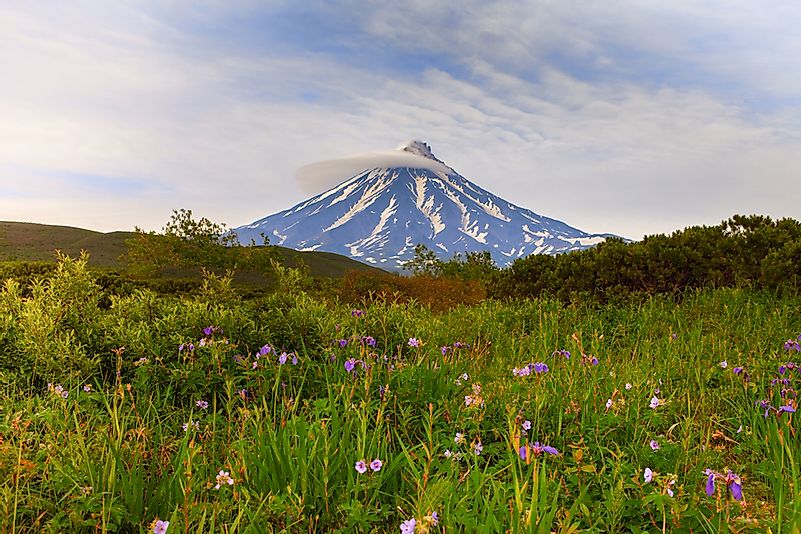 While the exact number of volcanoes on Earth is unknown, partly because some are below the surface of the ocean, scientists estimate there are more than 1,500 active volcanoes. About half of them are found in the Ring of Fire, basically the basin of the Pacific Ocean, its coasts and islands, areas where eruptions we talk about often occur, such as those in Chile.

There are five volcano categories, according to the U.S. Geological Survey:

Cinder Cones and Scoria Cones: They tend to be the smallest volcanoes, never rising more than a thousand feet, with a bowl-shaped crater at the summit.

Composite Volcanoes and Stratovolcanoes: These are huge. Some are as tall as 8,000 feet, with steep sides (Mount Fuji in Japan, for example).

Shield Volcanoes: With diameters of up to 4 miles, these volcanoes can spew lava in all directions.

Lava Domes: When thicker lava fails to flow very far from the crater, it can form a dome, which can later shatter and fall down the sides of the volcano.

Calderas: After a violent eruption, instead of the mountain shaped craters, a caldera could form, an opening in the earth, up to 25 kilometers wide and several kilometers deep.

Some volcanoes are extinct. It is a label reserved for volcanoes that have not erupted for 10,000 years, or 8,000 BCE. We can be fairly confident from their track record and our experience that they will not erupt ever again. Halfway between extinct and active volcanoes are dormant volcanoes. This third variety has not erupted in a long time, just not long enough to be sure of its extinction. We just cannot be sure that we're not in for another surprise.

What Causes Volcanoes to Erupt?

A volcano erupts when thick magma is forced to its surface, causing a build up of pressure that is released through an explosion.

This page was last updated on September 18, 2019.
By Ryan Hiraki