Besides being a popular holiday destination with beautiful beaches, palm trees, luxurious villas and resorts, and azure waters, Mauritius also has its wildlife. The island was created by a volcanic eruption millions of years ago and managed to remain invisible to the outside world, resulting in animals with unique characteristics. However, this isolation prevented diversity. Once the island was discovered, it became a popular destination for explorers who used it to replenish their food stock. Hardwood was harvested and sold overseas, and invasive species quickly overran the native ecosystem. Explorers introduced rats, goats, dogs, and rabbits that became feral after their handlers left. Hunting, deforestation, and farming have changed the natural setting of Mauritius, resulting in the extinction of several species, including the Dodo. Many of the surviving native species are staring at the same fate. The following are some of the animals found in Mauritius. 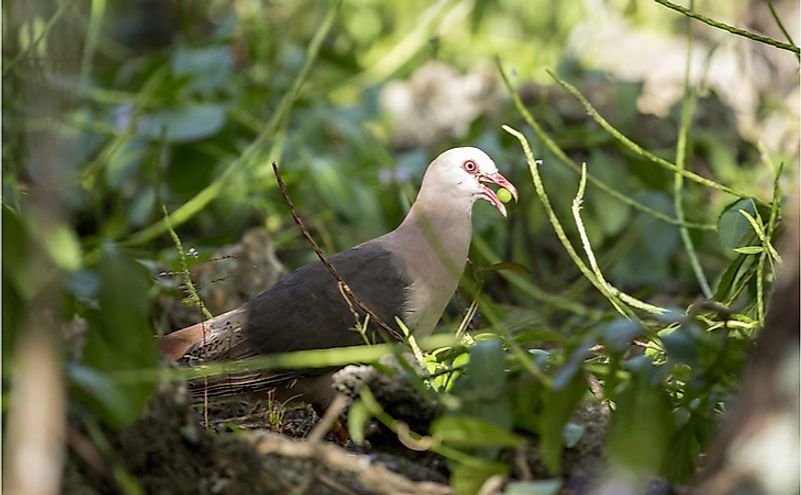 Pigeon des Mares, also known as the pink pigeon or pigeon rose, was once found throughout the island of Mauritius but has since been declared critically endangered. It is a medium-sized bird with a pale pink body, rusty brown tail, and brown-wings. The population of the birds began dropping in the 19th century, upon the arrival of Europeans who engaged in the destruction of forests for sugarcane cultivation, and the introduction of feral cats, monkeys, and mongoose. In the 1950s, there were about 50 birds, and by the late 1970s, the population had dropped further to about 20 individuals. Thanks to efforts by conservationists, there are about 470 individuals in the wild. 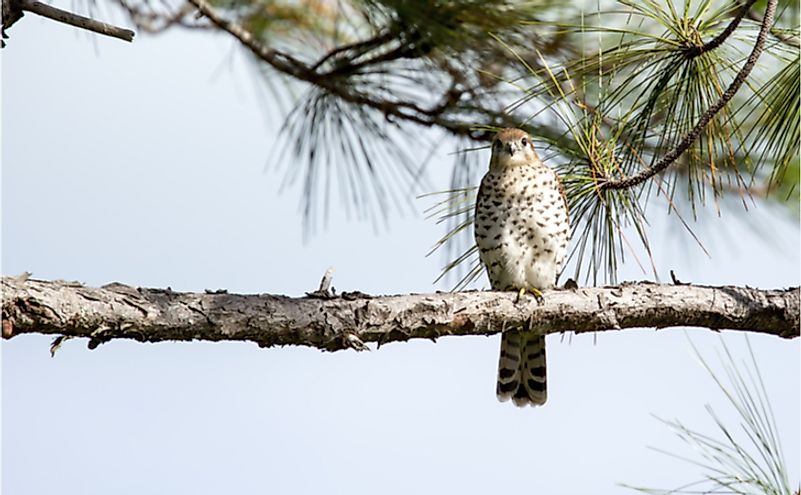 Crécerelle de Maurice or the Mauritius Kestrel is a raptor bird with an amazing survival story. It is a small bird with a creamy white chest and black blotching. The bird has existed since the Gelasian age about 2 million years ago. It thrived untouched on the island until 400 years ago when colonial settlers arrived and easily hunted it due to island tameness. Deforestation and the use of pesticides on farms, notably DDT, further contributed to their decline. Less than 1,000 individuals remain in the wild. 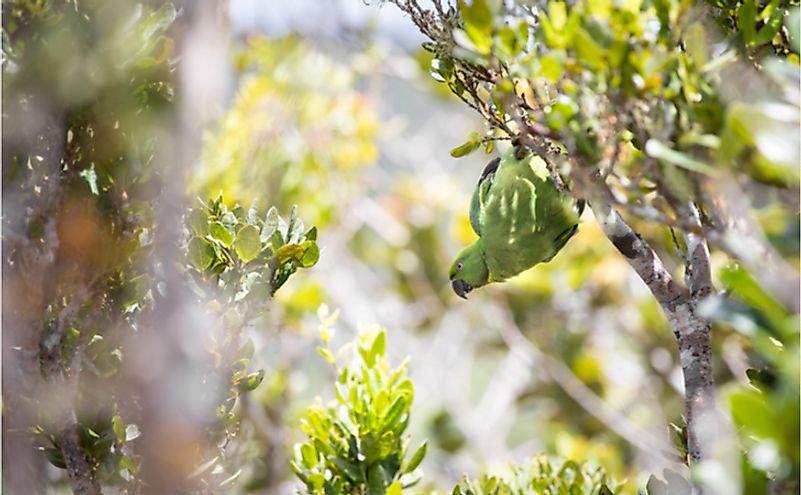 The Mauritius Parakeet or the Echo Parakeet is endemic to the island. It is the only surviving species of the six parrots that inhabited the island. In the 1980s, the population had declined to fewer than 20 birds, but extensive conservation efforts have seen the number rise to about 300 birds. The survival of the species is threatened by competition from invasive birds, rats, and habitat destruction. 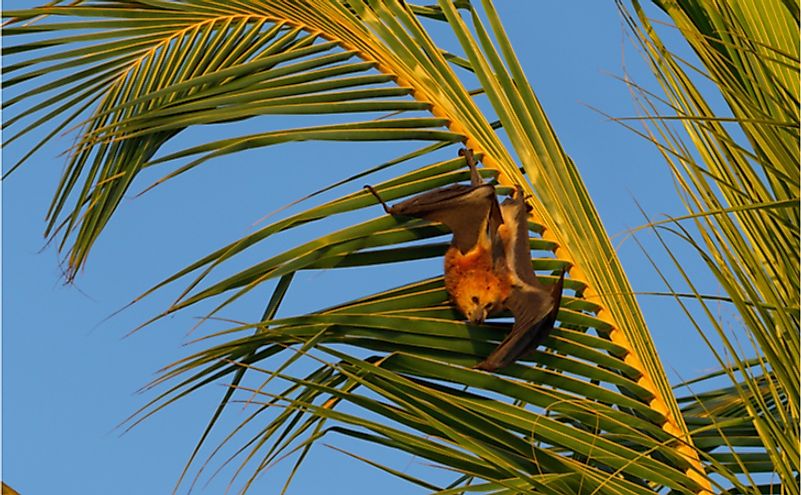 The Mauritian fruit bat, also known as the Mauritian flying fox, is the only native mammal of Mauritius. The birds are primarily nocturnal but can often be seen flying around during the day. Despite their crucial role in pollination, illegal sport hunting, deforestation, cyclones, and predators are driving the species to extinction. 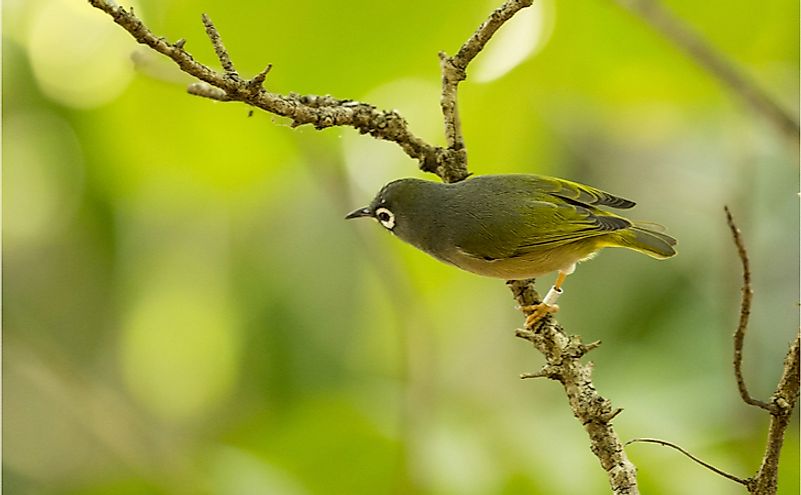 The Mauritius Olive White-Eye is the rarest and smallest songbird on the island. It is the least studied of the Mauritian birds because of its elusiveness. The bird is characterized by an olive-green plumage with a pale-yellow hue on the belly. There are fewer than 150 individuals in the wild. 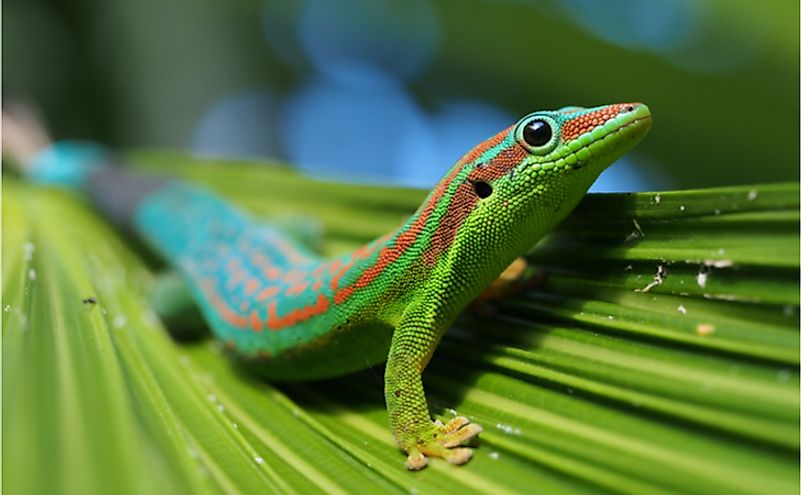 The ornate day gecko is a lizard that inhabits the warmer regions of Mauritius, particularly Round island, Coin de Mire, and Ile aux Aigrettes. The lizard is strikingly beautiful with a greyish brown head, a white neck, while the rest of the body can either be bluish green or purely green. It is about 5 inches in length.

The Salazar Telfair's Skink inhabits the offshore islands of Mauritius. In the late 1980s, about 5,000 individuals were restricted to Round Island, but conservation efforts introduced the skink to other islands, and the population has risen to about 50,000.

The terrestrial crab inhabits mainland Mauritius and several other offshore islets. Its population is stable compared to other animals because of its ability to survive in both terrestrial and marine environments.

The Aldabra tortoise is native to Seychelles. It was introduced to Mauritius in the 19th century to save it from possible extinction and replace the extinct native species.

The Durrell's night gecko is a native species of Round Island. It is named after Gerald Durrell, a conservationist who oversaw conservation efforts in the country in the 1970s. The IUCN has not officially assessed the species, but conservationists consider it critically endangered because of its limited range.

This page was last updated on November 5, 2019.
By Victor Kiprop

What Animals Live In Mauritius?