Pakistan is a country in South Asia that served as the cradle of ancient human civilizations of South Asia. Iran, Afghanistan, India, and China border the country. Pakistan ratified the 'Convention Concerning the Protection of World Cultural and Natural Heritage' in 1976. This made the country eligible to have their cultural or natural sites included on the list if they were nominated and approved. Currently, Pakistan has six UNESCO World Heritage Sites in their country, all of which are cultural locations. 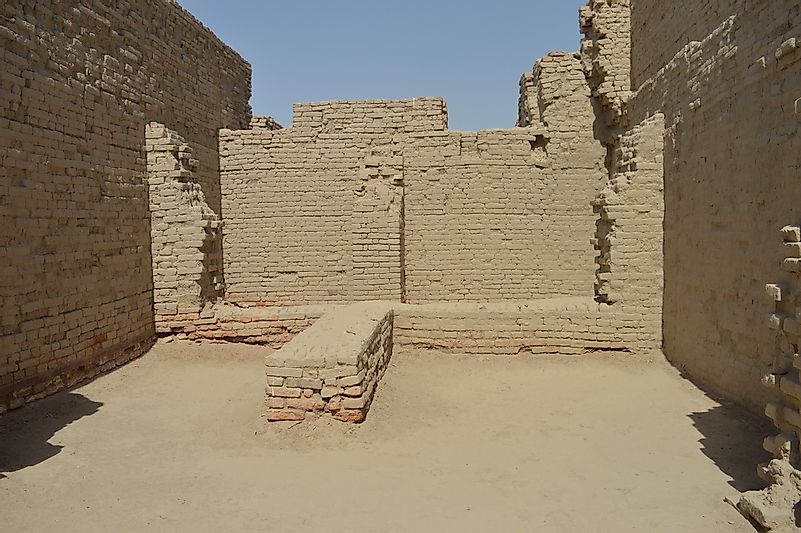 The Mohenjodaro Archaeological Ruins were part of the first trio of Pakistani World Heritage Sites being inscribed as such in 1980 and is located in the province of Sindh. The city is the ruins of the ancient and large city of Moenjordaro, which was inhabited by the Indus River Valley Civilizations, also known as the Harappan Civilization. The city was built at some point around 2,500 B.C. and was abandoned at some point in the 19th century B.C. when the Indus River Valley Civilization rapidly declined. The town is made up of two parts, the lower town which shows off an early system of town planning and the upper town, which has an acropolis set on high embankments and ramparts that protect it. The entire town is made and built on just unbaked bricks and sits on the right bank of the Indus River. This site is important as it is the most well-preserved urban ruin in the Indus Valley and it also gives great insight into the customs, art, religion, architecture, sanitation, agriculture and administrative processes of a civilization. 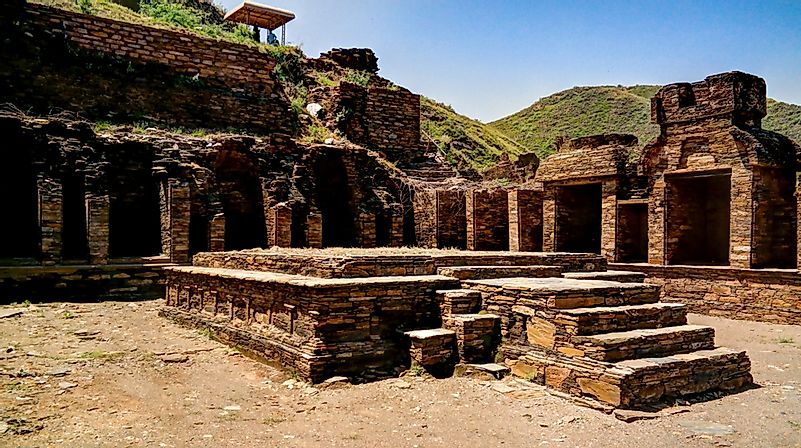 The Takht-i-Bahi Buddhist Ruins and Sahr-i-Bahlol City Remains are two different nearby sites that have been inscribed together as one UNESCO World Heritage site and are located in the North West Frontier Province of Pakistan. The Takht-i-Bahi Buddhist Ruins is a monastic complex that was founded at some point in the 1st century B.C. as a Zoroastrian site under the Indo-Parthian Kingdom (12 B.C. to 130) and then shortly came under the control of the Kushan Empire (30-375) and became a Buddhist monastery. The site is located on a range of hills, ranging in height from 36.6 meters to 152.4 meters and covers an area of about 33 hectares. The city holds the remnants of what once was a small fortified town built during the period of the Kushan Empire. The city is built on a lengthened mound that is 9 meters at its highest points and surrounded by the remains of defensive walls. 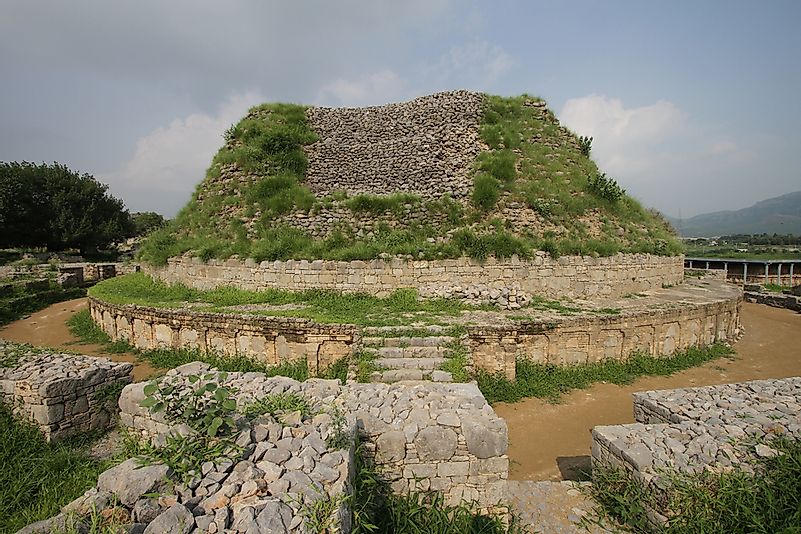 The site of Taxila is made up of four ancient settlement sites, as well as some other ancient religious buildings and is located in the Punjab Province of Pakistan. The site of Taxila is made up of the archaeological sites and ancient settlements of Saraikala, Bhir, Sirkap, and Sirsukh that together show the evolution of urban settlement in the Indian subcontinent area. The Saraikala site is a prehistoric mound that is the earliest settlement of the four and was used from the Neolithic period and the Bronze and Iron Ages. The Bihr site is a mound that was founded at some point in the 6th century B.C. by the Achaemenid Empire and is also associated with Alexander the Great's (356-323 B.C.) glorious entry into the city upon conquering it.The site of Sirkap was founded around the middle of the 2nd century B.C. as a fortified city that used a Hellenistic grid system and whose architecture has a major Western classical influence. The site of Sirsukh is the ruins of a Kushan city, with walls and rounded bastions.The site is also the location of the Mesolitihic period Khanpur cave, as well as a wide array of Buddhist complexes, monasteries, and stupas. There is also a medieval period mosque, madrassa, and ziarat at the Giri complex site. 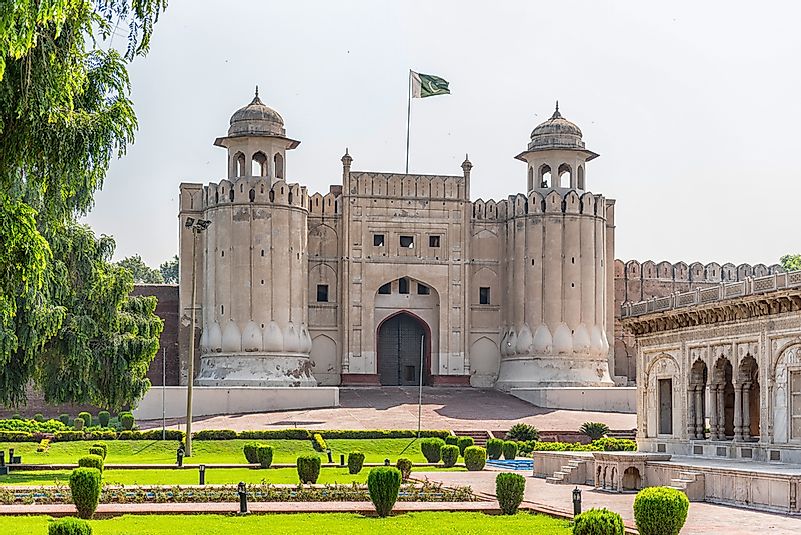 The Lahore Fort and Shalamar Gardens were part of the duo of Pakistani World Heritage Sites being inscribed as such in 1980 and is located in the province of Punjab. This site is made up of two separate locations, the Lahore Fort and the Shalamar Gardens, which are located 7 kilometers apart and are both in the city of Lahore. Both sites were built during the height of the Mughal Empire (1526-1857) under Emperor Shah Jahan (1592-1666).The Lahore Fort is made up of stunning marble palaces and mosques that are precisely decorated with gilt and mosaics. That site houses the Masjidi Gates, which has two bastions, and a Public and Private Audience Hall (Khana-e-Khas-o-Am). There is also the Court of Shah and the Shish Mahal, which is an amazingly stunning palace that sparkles with mosaics of glass and semi-precious stones. The Shalamar Gardens are a feast for the eyes with three terraces that have lodges, giant ornamental ponds, and even waterfalls. Both sites are amazing examples of the artistic expression and power of the Mughal Empire that fused the cultures and influences from Hindu, Islamic, Mongol and Persian sources. 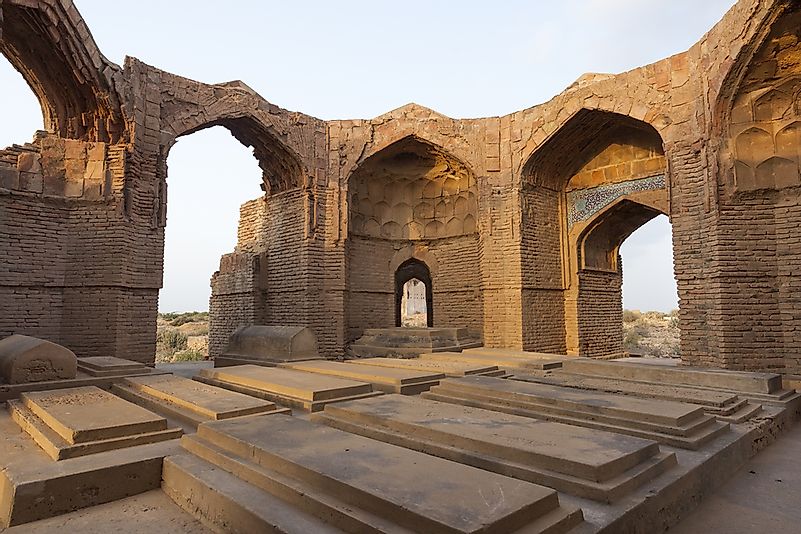 The Makli, Thatta Historical Monuments is made up of two different sites that are located in the Province of Sind. The city of Thatta was the capital of three consecutive dynasties before coming under the rule of the Mughal Empire. Throughout the Mughal rule from the 14th to 18th century, the city was always being embellished with mosaics, marble, and gilt. The Makli site is a necropolis that is one of the largest in the world on the top of the Makli Hill on the Indus River's delta. The site has around half a million tombs and graves in an area that is around 10 square km in size. The tomb is made of stone or brick, and certain ones are decorated with glazed tiles. The site houses the tombs of kings, queens, governors, scholars and other important people of the past. 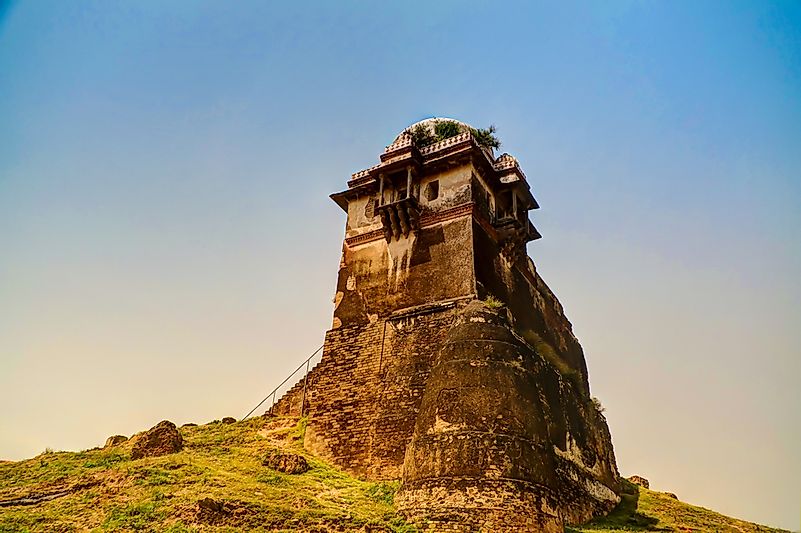 The Rohtas Fort is the most recent site in Pakistan to be designated a UNESCO World Heritage site in 1997 and is located in the Punjab Province The fort was built in the 16th century under the Suri dynasty (1540-56) by Shera Sha Suri (1486-1545). The fort has a giant 70-hectare sized garrison with masonry walls that are more than 4 kilometers (2.48 miles) in circumferences and has 68 bastions and 12 massive gateways. The fort has its internal water supply provided by stepped wells and even has its own mosque, the Shahi Masjid. The fort is a fascinating example of early Muslim military architecture and was used by the Suri Dynasty, and then the Mughal Empire until 1707, and it was later reoccupied at some point in the 17th and 18th centuries by the Durrani and the Sikh rulers of the area.

The preservation of Pakistan's UNESCO World Heritage Sites require a lot of monitoring and face a number of different threats to maintain their current status and integrity. These sites are threatened by a wide variety of issues, including but not limited to, urbanization, uncontrolled vegetation, pollution, lack of security, looters, natural disasters and climate change. There are a few things that Pakistan's government can do to help protect these sites, like deciding to increase security at these sites, passing harsher laws for people who illegal loot or violate these sites and getting people to help restore and maintain the sites.

How Many UNESCO World Heritage Sites Does Pakistan Have?