Ireland is an island that ranks as the second-largest in the British Isles, the third-largest in Europe, and the twentieth-largest in the world. Located in the North Atlantic Ocean, the island is separated from Great Britain by the North Channel, St George’s Channel, and the Irish Sea. Politically, the island is split between the Republic of Ireland and Northern Ireland, which is part of the United Kingdom (UK). The Republic of Ireland, often referred to simply as Ireland, occupies the majority of the island, with an area of 27,133 sq mi, and has an estimated population of 4.9 million and a population density of about 181.3 people per sq mi. Additionally, 26 of the island's 32 counties are part of the Republic of Ireland. 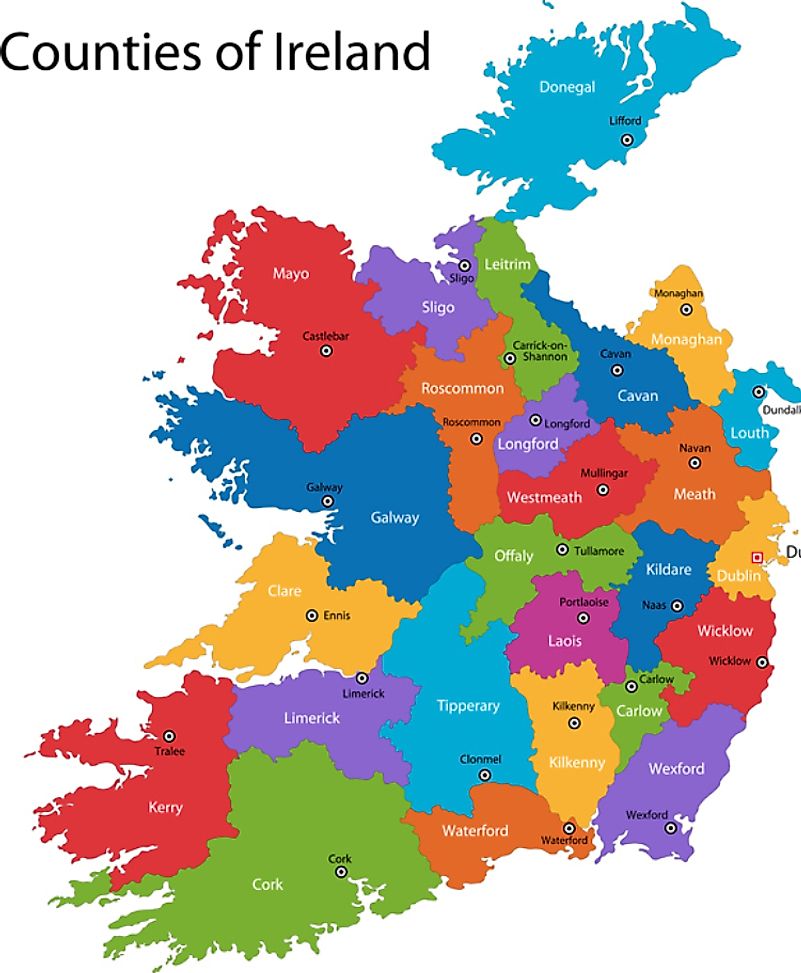 The Most Populous Counties in Ireland

County Cork is the southernmost and most extensive county in Ireland, occupying an area of approximately 2,900 sq mi. The county is located in the province of Munster and is named after the city of Cork, which is the third most populous city in Ireland. Cork is surrounded by four counties, namely Waterford, Tipperary, Limerick, and Kerry. County Cork had an estimated population of 519,032 in 2011 (257,470 males and 261,562 females), and contained 11 towns with a population of about 4,000 people in 2006. Cork has a population density of about 190 people per sq mi.

Located in the province of Connacht, County Galway is the third-most populous county in Ireland. Galway occupies an area of approximately 2,374 sq mi and has a population density of about 110 people per sq mi. There are numerous Irish-speaking regions in the western parts of the county, and about 20% of Galway's population live in Gaeltacht-speaking districts.

County Kildare is located in the province of Leinster, within the Mid-East Region of Ireland, and is named after the town of the same name. It is the twenty-fourth most extensive county in Ireland, occupying an area of approximately 654 sq mi, and had an estimated population of 210,312 people in 2011. County Kildare is bordered by five other counties, namely Wicklow, Dublin, Offaly, Meath, Laois, and Carlow.

Ireland has been occupied for more than 9,000 years, with genealogical and historical records suggesting some of the earliest population groups inhabiting the island included the Ulaid and Cruthin. Over the past 1200 years, the Irish culture has been influenced by Viking, Fleming, Norman, Scot, Welsh, South American, East European, and African cultures. The population of the Republic of Ireland increased by 8.2% between 2006 and 2011, to a total of 4,588,252. The country had the highest birth rate in the European Union (EU), with about 16 births per 1,000 people in 2011. The number of non-Irish nationals living in the country decreased by 2% between 2011 (544,357) and 2016 (535,475).

This page was last updated on October 25, 2019.
By Geoffrey Migiro