Australia, including its territories and offshore islands, houses approximately 900 recorded bird species. Of these, 165 are vagrants, and 45% of the remainders are endemic to Australia, and are not found anywhere else on earth. Due to climate change, approximately 10% of the total Australian birds may be extinct by the 22nd Century. This variety of bird species ranges from small birds such as the 8-centimeter-long weebill to the large birds of prey such as the wedge-tailed eagle and the flightless emu.

The wedge-tailed eagle is one of the largest birds of prey in Australia. It is characterized by a distinct, long, diamond-shaped tail, narrow wings with notched tips, a flat head, brown eyes, formidable beak, and cream-colored feathered feet. Their bodies are dark brown with red-brown hackles on the back of its neck and a grey-brown band across the upper wings. The female bird is larger and heavier than the male. The juveniles are dark brown with distinct reddish edges at the feathers, golden napes, and wider wings. They occur in diverse habitats from woodlands to savanna to forest and plains. Their population is widespread in Australia, southern New Guinea, and other islands such as Maria Island, Flinders Island, and Kangaroo Islands. 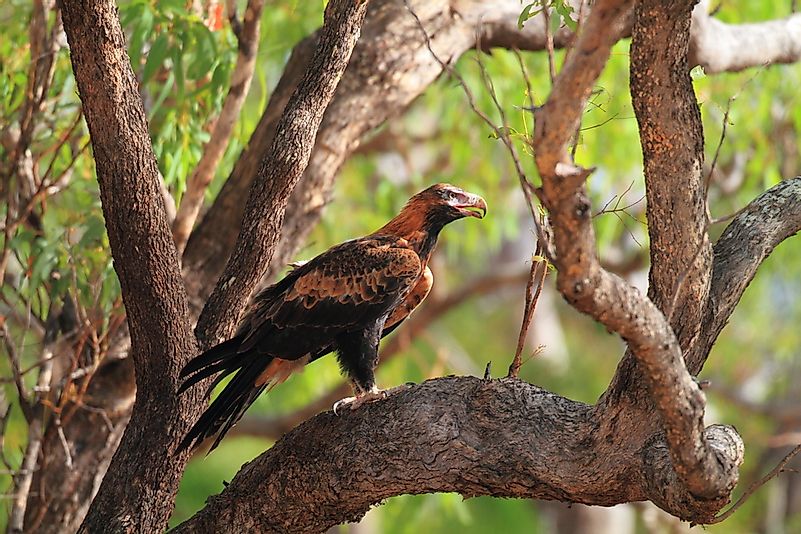 The bird feeds mostly on terrestrial mammals as well as reptiles and other birds. The younger birds feed on carrion during winter. They love feeding on carcasses in groups of up to a dozen birds and may snatch food from other animals. The female birds build a large tick nest in a typically large tree or sometimes on rocks and cliffs. It then lays one or two eggs in the nest, and both adults incubate the eggs in succession for 42 to 48 days. The juvenile fledges at around 70 to 95 days and remains dependent on the parents for 3 to 6 months. They attain maturity at 3 to 5 years but begin breeding after another one year. They have a lifespan of between 20 and 25 years. It faces threats of human persecution due to a belief that it has an adverse impact on livestock. However, its population is still increasing.

The Tawny Frogmouth is a large big-headed bird measuring up to 53 centimeters long. In general the plumage is silver-grey with slightly paler, streaked, and mottled with a black and rufous belly. It has yellow eyes, binocular vision, wide heavy olive-grey to blackish bills, and short legs with small, weak feet. The bird inhabits scrub-lands, forests, and areas of acacia, along with eucalyptus woodlands. It is an almost exclusive insectivorous bird feeding on a wide array of insects including worms, slugs and snails, and spiders. Occasionally, the bird also feed on scorpions, mice, frogs, and other small birds. 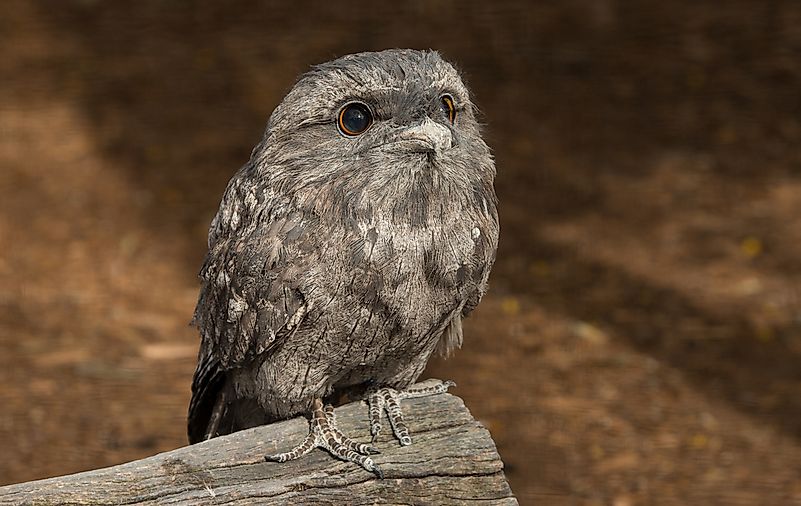 The bird catches its prey using its beaks instead of using talons like the owls. They sit around on a branch and wait for food, and when it hunts it pounces from a low perch on the small terrestrial animals. They live in monogamous pairs until one of them dies and maintains permanent territories, and when threatened, they adopt a motionless stance, close their eyes and camouflage into their surroundings. The pairs keep the same nesting site where the female lays 2 to 3 eggs and both adults take turns to incubate them until they hatch after 30 days, fledge at 25 to 35 days and juveniles then leave the nest. They are abundant throughout their range.

The Forest Kingfisher has a blue head with a pale back, a white belly, and a white spot on the bill. The male has a white collar which is absent on females. Their tails are blue above with a gray streak below. It essentially inhabits tropical and subtropical habitats in Indonesia, Solomon Islands, Papua New Guinea, and Australia. It feeds on invertebrates and kills its prey by hitting it against the branch. During the breeding season, the male looks for a perfect place to nest and the long term monogamous pair builds the nest. Both adults incubate the 3 to 6 white eggs and also take turns to feed the fledglings for at least one month before they disperse. 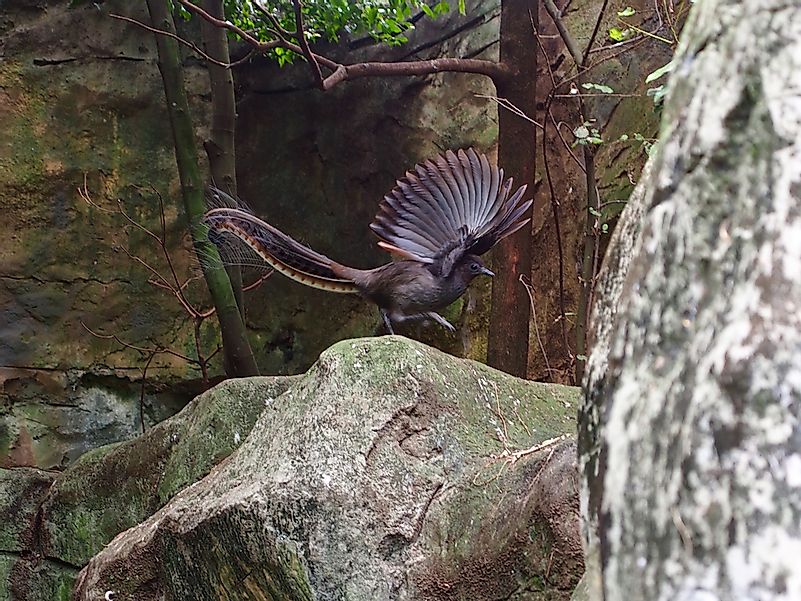 The male Superb Lyrebird has an elaborate tail with 16 feathers, with the two outermost feathers joining to form a "lyre", closely followed by two guard plumes and 12 long lacy feathers. The tails take seven years to develop fully. The bird can mimic various sounds with males being louder and singing more often than females. They breed during winter where the adult females and males defend separate territories and only the female builds the nest lays one egg, incubates and cares for the young one.

The Australian biodiversity of birds is under great threats, primarily from environmental degradation and climate change. The government of Australia has put up conservation strategies to protect its unique and endemic birds species including establishing of natural reserves and legislation. The most notable natural reserve is the winter avian fauna of wanjarri nature reserve and Lake Mason Conservation Park which is home to around 100 species of birds. Together with the birds mentioned above are the laughing kookaburras, Mistletoebird, barking owl, noisy friarbird, and the eastern yellow robin.

What Are The Native Birds Of Australia?

Australia, including its territories and offshore islands, houses approximately nine hundred recorded bird species. Of these, 165 are vagrants, and 45% of the remaining number of species is endemic to the country. Due to the ongoing climate change, approximately 10% of the total Australian birds may be extinct by the 22nd Century. The variety of bird species found in Australia ranges from small birds such as the 8 cm long weebill to large birds of prey such as the wedge-tailed eagle and the flightless emu. Laughing Kookaburra, Australian King Parrot, Australian Brush Turkey, Australian Pelican, Mistletoebird are some of the other native Australian birds.

This page was last updated on October 31, 2019.
By Joyce Chepkemoi

What Kind of Birds are Found in Australia?