Australia has a broad range of marine fisheries, as well as a fair amount of fresh water bodies. These are in turn home to a vast diversity of fishes, of which around 25% are endemic to the country. The fish habitats in Australia include hot desert springs, freshwater springs, rivers, lakes, and streams found inland as well as mangrove swamps, coral reefs, seagrass meadows, and the deep sea waters. About 75% of the fish found in Australia live in marine waters. The fish are exploited for food and sometimes as a sport.

The Murray cod is a critically endangered predator fish found in the Murray-Darling River System of Australia. The Murray cod occupies habitats such as clear, cold, fast-flowing streams to the large slow-flowing and meandering rivers in the Murray-Darling Basin. The Murray cod has a deep, elongated body with a round cross-section, a broad scalloped head with a large mouth lined with pads of small needle-like teeth. The cod is a carnivorous fish that feeds on smaller fish within its habitats. The Murray is large with adults reaching 80 to 100 centimeters long with a weight of around 113 kilograms. The population of the Murray cod is threatened by overfishing, habitat destruction, siltation of rivers, and pollution by arsenic and competition for food with introduced trout species. 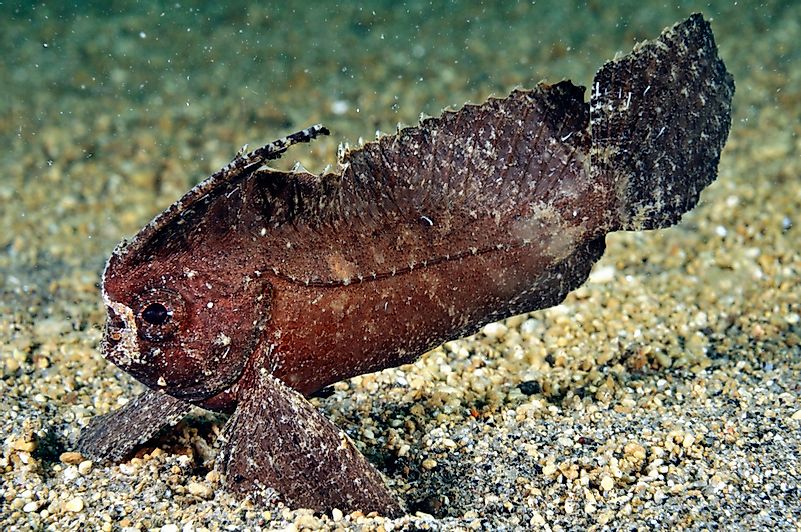 The cockatoo waspfish is a small opportunistic predator found in the Pacific Ocean in the coastal waters of Malaysia, Japan, Indonesia, and Australia. The species is nocturnal and benthic mainly staying in the substratum and is capable of mimicking a crumpled leaf or drifting seaweed thus catching the prey unaware. The fish feeds on shrimps and other small crustaceans. The fish grows up to 6 inches in length. The cockatoo has a laterally compressed body with the dorsal fin running from the head to the excellent base of the caudal fin. The body color varies from cream to dark brown with irregular spots. Movement is through pectoral fins. 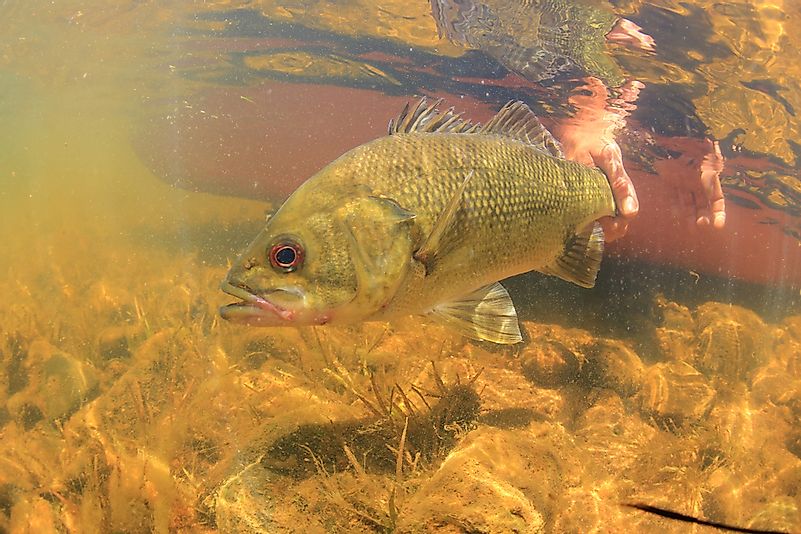 The Australian bass is a native freshwater fish that is highly predatory and migratory, and found along the coastal rivers and streams along the east coast of Australia. The bass has a moderately deep, laterally compressed and elongated body. The mouth is medium sized, and the eyes are large and vary from red to dark color depending on the intensity of light. The body color also ranges from gold to bronze or bronze green depending on the nature of the stream they occupy. The bass grows up to an average of 20 to 30 centimeters in length and weighing 400 to 500 grams, with the maximum size being around 2.5 to 3 kilograms and 55 to 65 centimeters. The population of the bass has faced a severe decline over the years due to blocking and damming of rivers thus affecting spawning and habitat degradation as well as overfishing.

The western carp gudgeon is a small perciform fish found in the Murray-Darling river system in Australia, where it lives in waters up to a depth of 1 or 2 meters where there are plenty of aquatic weeds. The fish has an average body length of 30 to 40 millimeters with some reaching 60 millimeters. Their bodies are usually yellowish to clear with dark gray blotches and semi-translucent fins. The fish spawns in the summer attaching its eggs on the aquatic leaves. The eggs are sometimes eaten by juvenile Murray cod. Their population is threatened by the introduced Asian fish parasite which has also affected other native Australian fish.

​Other Native Fish of Australia

Other fish in Australia include the Australian grayling, flat needlefish, Queensland lungfish, Kosovo climbing galaxies, Macquarie perch, and the starry triggerfish, among many others. These are native species in Australia which makes it necessary to conserve their environment and exploit them only in sustainable manners so that their populations do not dramatically decrease or even become extinct.

What Fish Species Are Found In Australia?

The marine and freshwaters of Australia are home to a great diversity of fishes of which 25% is endemic to the country. Australia’s fishes live in a variety of habitats like rivers, lakes, hot desert springs, mangrove swamps, coral reefs, seagrass meadows, etc. Murray Cod, Australian Bass, Flat Needlefish, Queensland Lungfish, Macquarie Perch, Koaro Climbing Galaxias, etc., are some of the country’s native fish species.

This page was last updated on October 31, 2019.
By Benjamin Elisha Sawe