The giraffe is the world’s tallest land mammal. It’s most distinctive for its long legs and neck. Giraffes possess a brown mane, and a triangular shaped head topped with two hairy horns. For a mature giraffe, the legs are about 6 feet in length, as is the neck as well. The male is both taller and heavier than the female. According to the National Geographic Society, from head to toe, the height of a mature giraffe typically ranges from 14 to 19 feet. Its skin coat has brown patches stained with black, and separated by a beige coloration, and patterns and colorations vary by geographic region. A mature giraffe weighs from 1,750 to 2,800 pounds, and they have an average lifespan of 25 years. Both sexes have skin-covered knobs, called ossicones, on the top of their heads. Female ossicones are smaller and have a small tuft of fur on top while male ossicones are bald on the top. These knobs are used to protect the head when males fight, which involves swinging their necks at each other in a show of strength called necking. They have a unique way of walking moving both legs on one side of their body and then both legs on the other side. Although Giraffes run in a similar style to other mammals, swinging their rear legs and front legs in unison. They can reach 55 kilometers per hour (35 miles per hour) at full speed, but only can sustain such in brief spurts.

The giraffe is a herbivorous browser, meaning it consumes bushy and woody plants. According to Giraffe Conservation Foundation, (GCF) the giraffe can adapt its diet depending on the plant or tree species available in each region. Spending most of the day eating, giraffe consumes over 100 pounds (45 kilograms) predominantly feeding on the leaves and buds of trees and shrubs. In arid grasslands, the giraffes there eat Acacia leaves and shoots. They also may eat vines, herbs, flowers and fruits, especially in the rainy seasons. Grass in low quantities also forms part of the giraffe’s diet. To feed, the giraffe uses its tough, dexterous long tongue and lips, in order to pluck leaves and shoots, even from the thorniest of plants. Males can feed on foliage higher up than females due to their greater heights. Although herbivore, giraffes has been documented licking dried meat off bones of a carcass.

3. Where do Giraffes Live?

The giraffe is native to many African countries, including Kenya, Cameroon, Chad, Niger, Uganda, Namibia, Botswana, Zimbabwe, Zambia, Tanzania, Angola, and South Africa. Wild grassland plains, woodlands and the savanna are the most common habitats for giraffes in those countries. According to GCF data, globally there are less than 80,000 giraffes remaining, essentially halved from the figures in 1999 when the International Union for Conservation of Nature (IUCN) estimated their numbers to stand at over 140,000. The decline in Giraffe numbers has been caused by poaching, human population growth resulting in forest loss, urban encroachment, and loss of habitat to fragmentation and degradation. 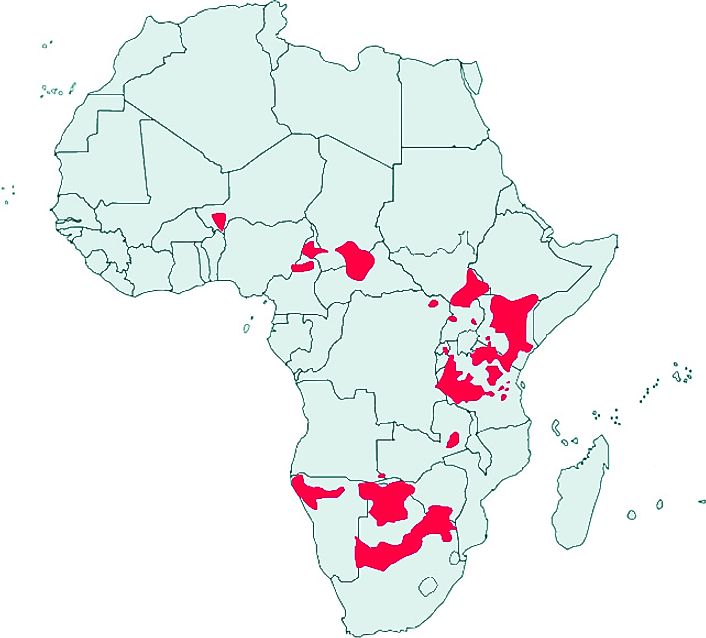 A giraffe is a non-territorial and very socially-oriented animal. The female adults bond in groups of 10 to 12 without a male, not counting their suckling young, and male giraffes stay in their herds. When happy, giraffes will engage in playful tussles engaged with their necks, or gallop about open spaces. When one male wants to establish its dominance over others within a herd, it engages in aggressive "necking" behavior. According to the Nature Institute, this is a form of forceful sparring wherein two giraffes stand side by side but facing opposite direction and trade blows to the head or neck with their horns. This can last for half an hour, and the first giraffe that to succumbs to exhaustion will wander away in defeat.

1. How Are Baby Giraffes Made?

Giraffes have no fixed mating season, but during rainy seasons chances for breeding are higher due to food availability. At seven years, a male giraffe will become sexually mature, and can then mate with sexually mature females of four years or older. When courting, a male rests its chin on the back of the female. In order to determine whether a potential female mate is in heat and ready to copulate, a male giraffe will taste a female's urine. Female giraffes with the estrus hormone detected in the taste of their urine will then be mated with. The average gestation period for a giraffe is 15 months, according to the GCF. A newborn calf weighs around 220 pounds, with a height of about 6.5 feet. A female giraffe will typically birth only one calf, although occurrences of twins are possible.

What are Some Fun Facts About Giraffes?

A giraffe's neck can't reach the ground when it's standing. This is why a giraffe has to spread its front legs or kneel to reach the ground for a drink of water. Also, giraffes only need 5 to 30 minutes of sleep per 24 hours. Giraffes are the tallest animals in the world.