Easter is a Christian holiday with celebrations honoring Christ’s resurrection from the dead. In America, Easter traditions include treats delivered by the Easter Bunny and Easter Egg Hunts. Though the same holiday is celebrated around the globe, the ceremonies and customs vary from country to country.

Take a look at some of the unique ways Easter is celebrated around the world from Fertility Stick Spankings to Death Dances, many rituals will provide a newfound appreciation for our cottontail visitor.

Children in the Scandinavian country of Sweden celebrate the holiday by gathering up old clothing and dressing up as witches. The ritual could easily be confused with Halloween as the costumed youngsters travel house to house carrying a copper teapot to collect their treats. Many will give artwork and drawings in exchange for candy.

Maracas, drums, and bamboo trumpets are all a part of the Easter festivities in Haiti. This country's traditions are an eclectic mix of Catholicism and Voodoo beliefs with festivities that include colorful parades, music, and chanting. Voodoo believers bring sacrificial offerings to appease the spirits in ceremonies in Souvenance Village, Haiti.

In France, the Easter bunny is replaced by church bells. According to tradition, when the church bells stop ringing from Good Friday to Easter Sunday, the bells sprout wings enabling them to fly throughout the cities delivering sweet treats to children.

The south of France has its own tradition on Easter Monday with a giant omelet served in the town’s square. The tradition dates back to a time when Napoleon and his army traveled through the area, stopping at the village of Haux, where they were served omelets. Napoleon was so pleased with the breakfast dish, he ordered the villagers to collect all their eggs to make a giant omelet big enough to feed an army - literally.

Cold temperatures don’t deter the people of Poland in their quest to maintain their Easter tradition of drenching one another with buckets full of water. The tradition dates back over 1,500 years. Originally the ceremony was a representation of baptismal water but, today, the tradition more recreational.

An Easter Monday spanking probably doesn’t seem like a pleasant way to celebrate a holiday, but citizens of the Czech Republic still honor the tradition. Long sticks are decorated with colorful ribbons used as whips as they playfully tap women walking by. The idea is to transfer the fertility of the sticks to the women.

In Spain, the Easter festivities take on a somber tone in the town of Verges with a Death Dance taking place on Holy Thursday. In a nighttime procession, participants march the streets dressed up in skeleton costumes and reenact scenes from The Passion of Christ. Those at the end of the parade carry a box of aches. In other parts of Spain, straw effigies of famous people are placed around the cities before being torn apart and pieces thrown into the air.

The island of Corfu holds an unusual Easter tradition on Holy Saturday involving clay pots. Fittingly named “Pot Throwing,” the ceremony is known for its tradition of earthenware being thrown out of windows. The practice is symbolic of the new crops that will be gathered in the newly purchased pots.

Red dyed eggs are another well-known Greek Easter tradition. The red dye is representative of the blood of Christ. Following midnight mass, an egg-cracking game is played where each person cracks their egg on top of another person’s egg. The last person with their egg still intact wins. The winner is said to have good luck all year long. 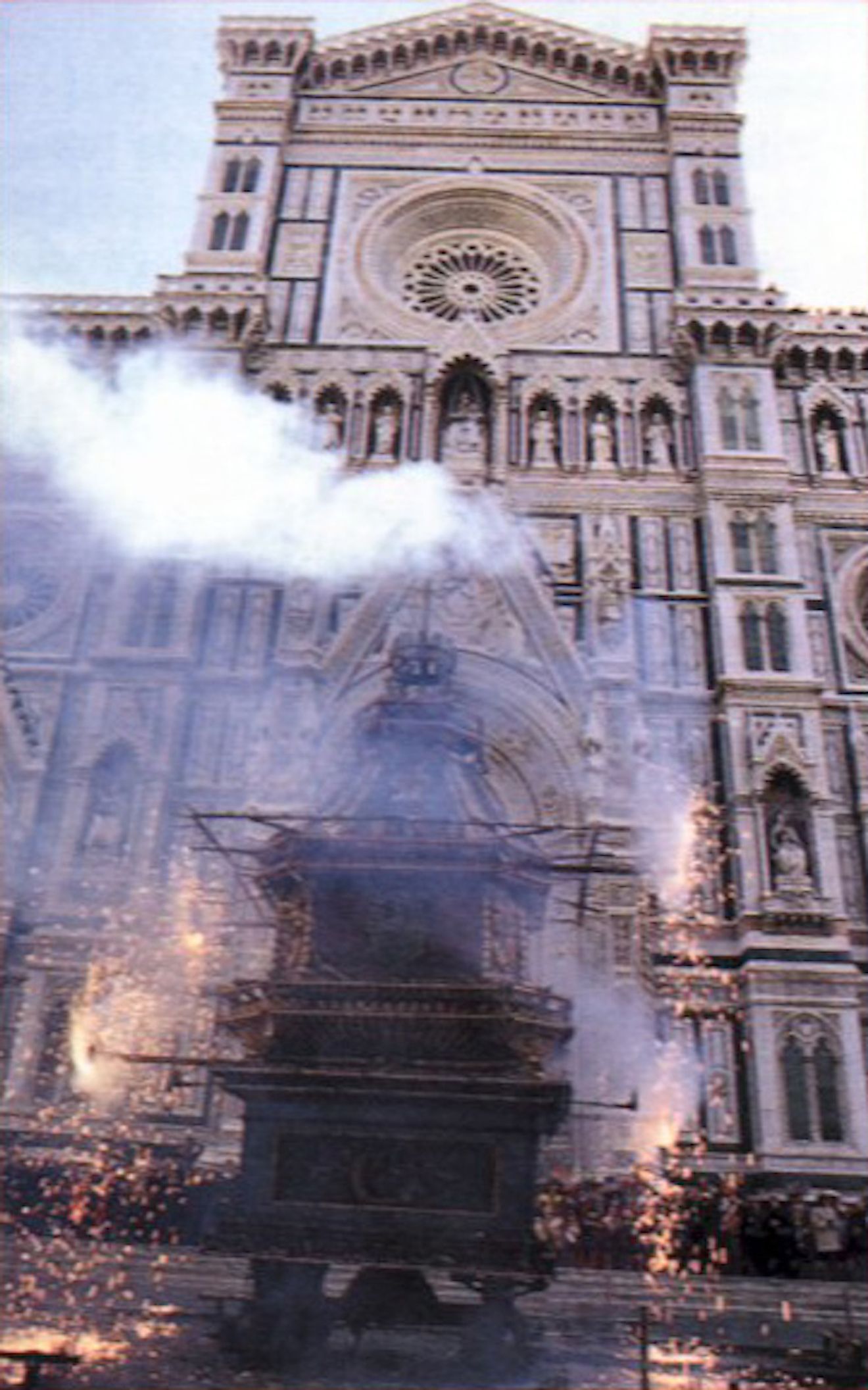 A 350-year-old Easter ritual continues to this day in Florence, Italy. The Explosion of the Cart, known as Scoppio del Carro, is meant to ensure a bountiful harvest in the coming Spring. An ornamental cart full of fireworks is paraded around the streets by participants dressed in 15th-century costumes. The procession ends outside the Duomo as the Archbishop of Florence ignites the fuse during Easter mass. When the lit fuse reaches the cart, a festive fireworks display is showcased for spectators to enjoy.

The Norwegian’s take on Easter has an Agatha Christie type feel. Easter Crime, or as they call it Paaskekrim, is a tradition where the Norwegians read mystery novels or watch detective shows on television. During Easter week, most Norwegians head to the mountains for a ski holiday and some family time playing board games.

Unlike many of Europe’s Easter celebrations, Australia’s Easter tradition is rather recent in history. The tradition began in 1991, with a modern update to a tradition already in existence. Up until 1991, Easter treats were delivered by the Easter Bunny. In 1991, a campaign was waged to replace the Easter bunny with the Easter Bilby. The reason for the change? Rabbits are considered pests that destroy the country's crops. Easter baskets once full of Easter bunnies are now full of chocolate bilbies. Chocolate makers donate a portion of their proceeds to funds for endangered animals.