Paraguay is a landlocked nation located in South America. It contains several ecological regions, such as the Gran Chaco, which is located in the western part of the country, within the Río de la Plata basin, and is composed of grasslands, marshes, forests, and sand dunes. Paraguay also contains part of the Pantanal, which is the world's the largest wetland, as well as the Atlantic rainforest, located in the eastern part of the country. These regions provide habitat to a diverse number of birds, mammals, amphibians, and reptiles, some of which are discussed below.

The jaguar, which is scientifically named Panthera onca, is the third-largest of the "big cats", after the tiger and lion. The cat usually weighs between 56 and 96 kilograms and grow up to 1.8 m in length. Jaguars normally inhabit dense rainforests and open plains, and can swim in water. The jaguar is usually a solitary animal, except during breeding season. During this period, males aggressively protect their territory and guard resident females against other invading males. Jaguars are carnivores that prey on pigs, deer, foxes, fish, frogs, and anaconda snakes. The animal typically has a lifespan of between 11 and 15 years. 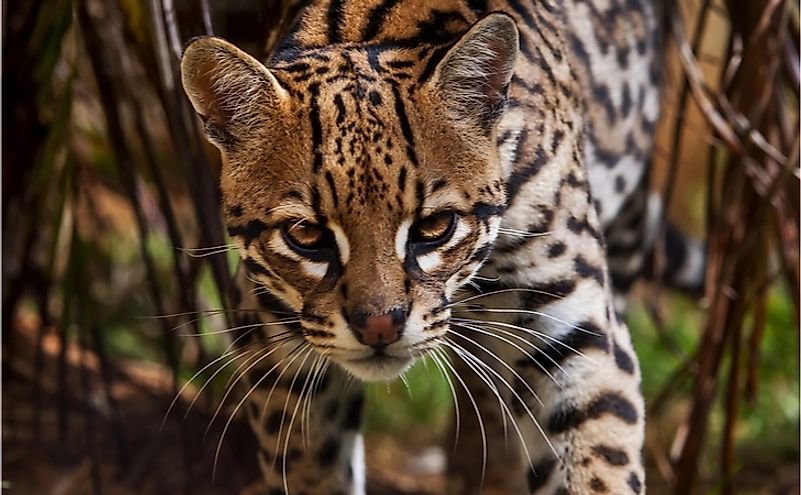 The ocelot, which is scientifically named Leopardus pardali and sometimes referred to as the painted leopard, is a small species of wild cat. It is the largest of the "small cats", and is nearly twice the size of a house cat. The ocelot has short legs, a short tail, a pinkish nose, and its fur has distinctive markings of varied patterns on an orange, brown, or white coat. Ocelots are territorial nocturnal animals that sleep in trees and bushes during the day and hunt in the night. They feed on frogs, iguanas, rabbits, fish, rodents, crabs, and birds. Females give birth to between 1 and 3 kittens, which reach maturity and leave their mothers after about 2 years. 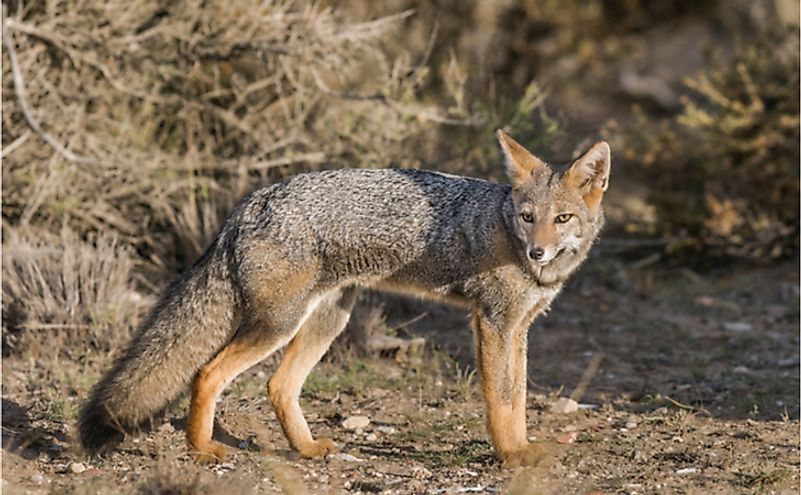 The pampas fox, which is scientifically named Lycalopex gmnocercus, is an animal that lives in pampas grasslands, ridges, deserts, and hills. Despite what its name might suggest, the pampas fox is not a true fox. Its body is grey in color, with a pale underside and brown marks on its head and legs. Pampas foxes are typically solitary and nocturnal animals, although they are sometimes active during the day. The species is omnivorous, feeding on rabbits, rodents, birds, lizards, frogs, fruits, sugarcane, and domesticated livestock. Breeding occurs once a year, usually between July and October, and females give birth to between 3 and 5 cubs in a den. After about three months, the young begin to hunt with their parents. The lifespan of a pampas fox is approximately 14 years.

The puma, which is scientifically named Felis concolor, meaning "cat of one color," is a large cat that is native to the Americas. Pumas have plain colored fur that can range from silver-grey to reddish-brown, and live in a variety of habitats including forests, deserts, swamps, and prairies. Their hind legs are large and muscular, which improves their running and jumping abilities, making it easier to catch prey. Pumas are carnivores that possess large, powerful paws and sharp claws, and examples of their prey include elk, moose, deer, pigs, hares, capybaras, and sheep. A puma can live for between 8 and 13 years. 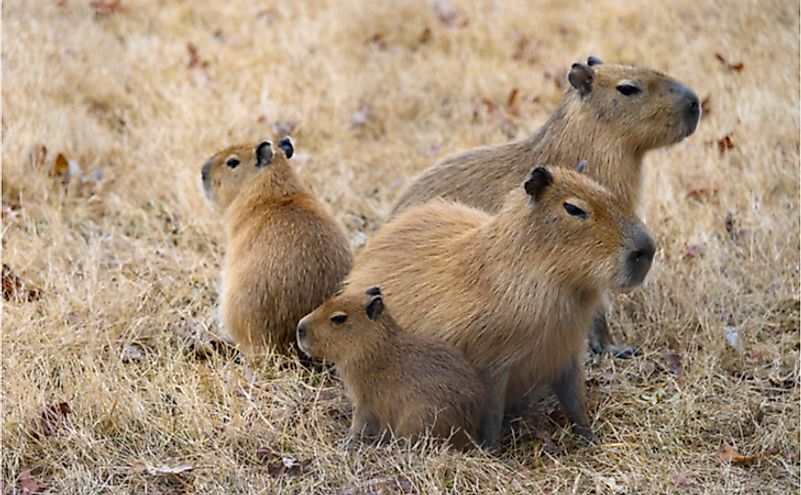 The capybara, which is scientifically named Hydrochoerus hydrochaeris, is a mammal that is native to South America. Its name is derived from a indigenous tribe in the Amazon that referred to the animal as Kapiyva, meaning "master of the grasses." The capybara is considered the world’s largest rodent. It is tailless, has webbed feet, and weighs between 32 and 79 kg. The species is hydrophilic, and therefore tends to inhabit places such as estuaries, marshes, riverbanks, and flooded savannah. Capybaras are herbivores that feed on aquatic plants, grasses, grains, melons, and squash. A capybara has a lifespan of 12 years. 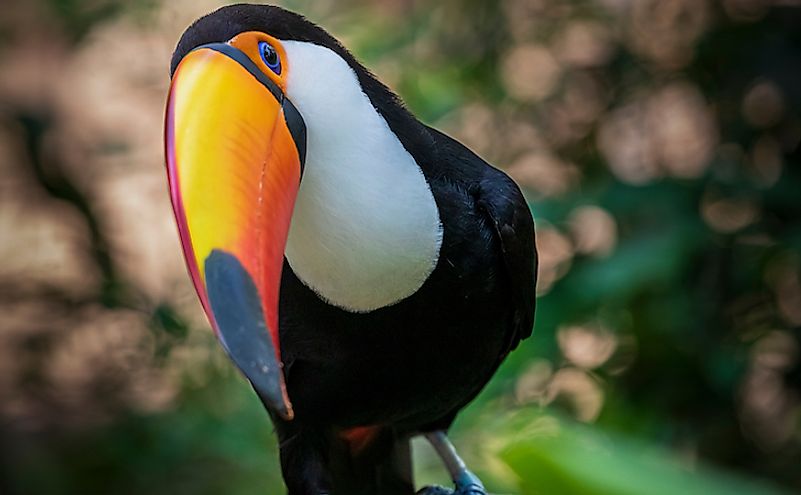 Toucans are medium-sized birds belonging to the family Ramphastidae, and includes nearly 40 different species. The birds usually live in rainforests and build nests in the trees. Toucans are brightly marked with large and colorful bills, and most of their body is covered with black feathers, except for the throat, which has yellow or white feathers. Toucans are omnivorous birds that primarily eat fruits, berries, seeds, eggs, insects, and small reptiles. When in danger of predation, either by hawks or eagles, toucans make loud noises to scare their predators and to alert other toucans. The birds are monogamous animals that live up to 20 years in the wild.

The giant armadillo, scientifically named Priodontes maximus, is the largest species of armadillo. It has powerful claws, a carapace covered with bony scales, as well as a distinct conical-shaped head. Giant armadillos are nocturnal animals and are mostly solitary. They are carnivores and primarily feed on termites, ants, spiders, and worms. After eating, the armadillo will dig a burrow and rest. Mating occurs once a year, and females give birth to a single pup. A giant armadillo can live for between 12 and 15 years. 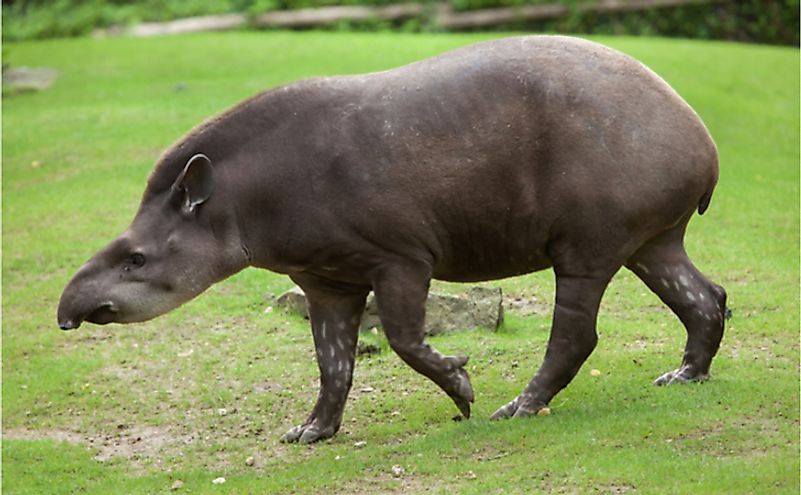 A tapir is a large mammal that is comparable in size to a donkey and resembles a wild hog. The animal has a distinct anterior snout, round body, short legs, and a stubby tail. Tapirs spend significant amounts of time in the water, but usually live on land, often in the woods, rainforests, grasslands, and mountains. The species is herbivorous, feeding on leaves and fruits, and prefer grazing in social groups called candles. A tapir can live for between 25 and 30 years.

The bush dog, also called the savanna dog, is scientifically named Speothos venaticus. It has a long reddish-brown fur coat, webbed feet, a short rounded snout, and a short bushy tail. Its webbed feet make the bush dog an excellent swimmer and well suited in habitats such as wetlands, lowland forests, and seasonally flooded areas. The bush dog is a diurnal animal, and is a carnivore that feed on tapirs, large rodents, and birds. The animal has a lifespan of up to 10 years in the wild. 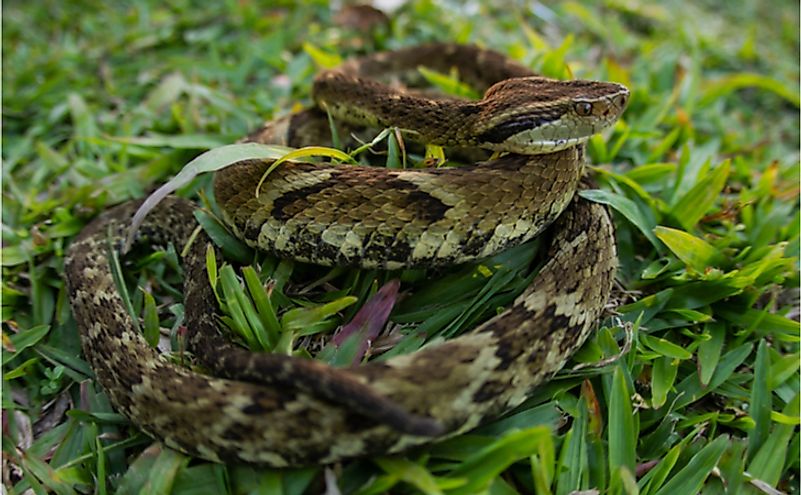 The jararaca is a slender terrestrial venomous pit viper that is scientifically named Bothrops jararaca. The snake usually inhabits evergreen and deciduous tropical forests, as well as savanna. Adult jararacas are terrestrial and feed primarily on rodents and birds. The species is ovoviviparous, and females can give birth to up to 20 young snakes at once. The snake’s gestation period is between 3 and 4 months, depending on the availability of food. In the wild, the jararaca can live up to 15 years.

This page was last updated on December 15, 2019.
By Sharon Omondi

10 Animals That Live In Paraguay