Some 10,000 years ago as the last Ice Age melted away, new bodies of water formed including the English Channel and Irish Sea, Great Britain and Ireland were now islands and both would eventually benefit from that process.

The Roman Legions (40,000 strong) crossed the dangerous English Channel in 43 AD. Literally undefended, the Romans named this wild new province, Britannia, and for some 350 years they controlled and influenced it, until their own Empire collapsed upon itself in 410 AD.

Though many invasion attempts occurred via the channel over the centuries (some successful, some not) in modern times the English Channel has helped Britain and Ireland defend themselves from outside invaders, namely the German Army during World War II.

The English Channel is a part of the Atlantic Ocean, and it separates the island of Britain (part of the UK) from northern France and joins the North Sea to the Atlantic Ocean. It is today one of the busiest shipping lanes on the planet. It's approximately 350 miles long, and at its narrowest in the Strait of Dover. It's somewhat shallow, with an average depth of less than 50 meters between Dover and Calais.

Completed in 1994, the Channel Tunnel, a 31-mile long rail tunnel beneath the English Channel at the Straits of Dover, connects France and England 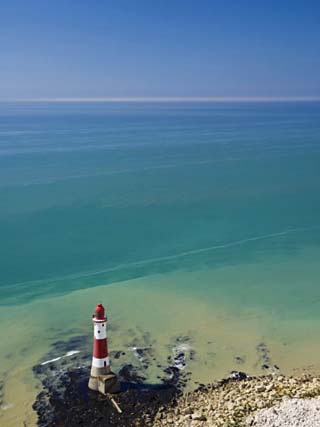 Beachy Head Lighthouse along the English Channel...
by Neale Clarke
Buy This at Allposters.com