Named for British rear admiral Sir Francis Beaufort, the Beaufort Sea, on the far edges of the Arctic Ocean, is positioned to the north of Alaska and Canada.

It extends from Barrow, Alaska, to the southwestern edge of Prince Patrick Island, then south along the western edges of Banks Island to the coast of Canada's Northwest Territories.

Dozens of rivers empty into the sea, including the massive Mackenzie, Canada's longest river. That river extends to (2,635 miles) (4,240 km), and becomes the second longest river in North America, next to the Mississippi/Missouri river system combination.

Though frozen solid in its central and northern areas for the entire year, the Beaufort Sea's coastal icepack opens briefly in August and September. This hard to reach, isolated body of water (mostly untouched by man) is home to whales, sea birds and numerous arctic animals.

In 1968, significant petroleum reserves were discovered in Alaska's Prudhoe Bay area. To transport that oil, the 800 mile-long Trans-Alaska pipeline was completed in 1977. It carries that oil south to the port of Valdez. 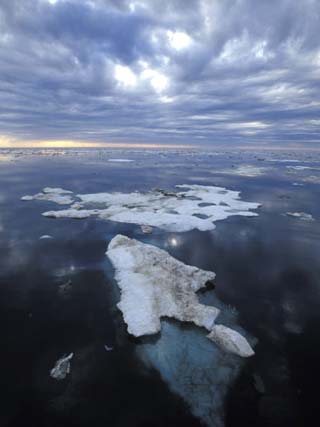 Melting chunks of ice float along the Beaufort Sea...
by Chris Linder
Buy This at Allposters.com