Numerous mountains ranges are found in the Balkans including the namesake Balkan Mountains that extend from Yugoslavia across Bulgaria. The Rhodope Mountains run across the borders of Bulgaria, Macedonia and northern Greece, and the Pindus Mountains extend from Albania down through central and western Greece.

Other ranges of significance include the Oeta, Othrys and Parnassus in central Greece and the Taiyetos Mts. in the Peloponnese.

The most famous mountain in the area is Mt. Olympus, the highest and most awe-inspiring peak in all of Greece.(see picture) In ancient times it was the mythical home of Zeus, and was declared the first national park in Greece in 1939. It stands at 9,568 ft. (2,918m) 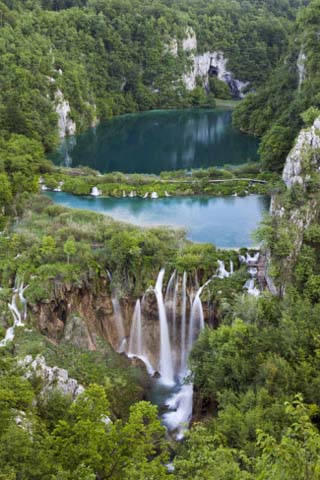 Plitvice Lakes in Croatia...
by Martin Zwick
Buy This at Allposters.com