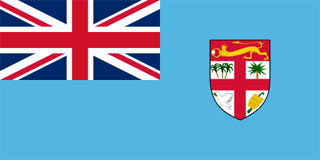 The current flag of Fiji was officially adopted on October 10, 1970.

The Union Jack (upper left), is representative of the country's long association with Great Britain. The flag's blue field is symbolic of the surrounding Pacific Ocean. The coat of arms display a golden British lion holding a cocoa pod, as well as panels displaying a palm tree, sugar cane, bananas and dove of peace. 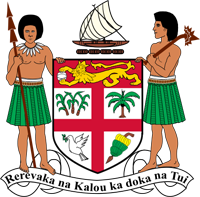 The coat of arms of Fiji was granted on July 4, 1908, and is composed of two Fijian warriors supporting a shield divided into four quarters. Three of the shield's four quarters contain crops (sugarcane, coconut palm, bananas) while the remaining quarter shows a dove (representing peace).

A wreath of Argent and Gules and a canoe make up the crest of the arms, and the national motto "Rerevaka na kalou ka doka na Tui" (Fear God and honour the Queen) is displayed on a ribbon below.