Isla de Margarita was discovered by Christopher Columbus in 1498, and was given the Greek name La Margarita, meaning 'pearl.' However, the name was later changed to Isla de Margarita, by Spanish monarchs, in honor of the princess from Austria who was set to marry Spanish Prince Don Juan. The local natives, Guaiqueries, welcomed Christopher Columbus and his crew, unaware that they would be exploited and made into slaves. Their extraction of pearls profited into a third of the Spanish Crown.

In 1561 the Spanish rebel, Lope de Aguirre, seized the island, and brutally opposed any threat of suppression against him. He was eventually captured and killed after crossing South America in an attempt to gain control of Panama. Throughout the 16th and 17th centuries, forts were built along the coast of Isla de Margarita, to counter the growing number of pirate invasions.

The island successfully gained independence from the Spanish in 1814, and became the first permanent free territory of Venezuela. In 1974 Margarita Island was declared a free port by the Venezuelan government, which led to a major growth in the economy and tourist industry. Today, the main source of income for the island is tourism; which comes as no surprise, considering the island is fabled for consistently sunny weather, and some of the most desirable beaches in the Caribbean.

Isla de Margarita is part of the Nueva Esparta state in Venezuela, and flies the Venezuelan flag.
Larger Venezuela flag

Isla de Margarita (Margarita Island) is a somewhat mountainous island, located about 40 miles north of the Venezuela mainland. Together with Isla de Coche and Isla de Cubagua, they collectively form the Venezuelan state of Nueva Esparta.

As with most Caribbean islands, the white-sand beaches of Isla Margarita are a main attraction for tourists. Playa El Agua is perhaps the more popular beach destination, due to the light surf conditions and ample selection of restaurants and shops.

Isla Margarita also contains La Restinga National Park, which offers boat tours that wind through the marshland, as well as key areas for bird watching and seashell combing. The beaches that surround the area are well-known for their considerable supply of seashells.

It does not have an annual rainy season, but when it does rain it is more likely to happen during the summer months. In fact, it is not uncommon for the island to receive very little to no amount of rainfall for several months at a time. 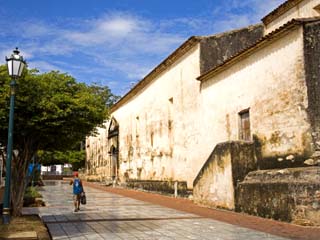 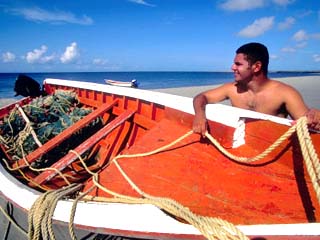 A local fisherman tends to his boat AllPosters.com