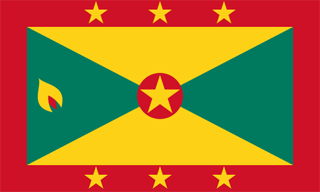 The flag of Grenada was officially adopted on February 7, 1974.

Red is symbolic of courage, yellow of wisdom and warmth, and green of vegetation. The left green triangle features a small nutmeg, the most famous product of the island. The gold outer stars represent the six parishes, and the centered star represents the capital city of St. George's. 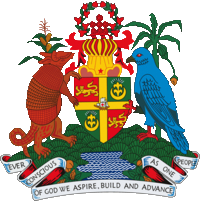 The Coat of Arms of Grenada is a shield divided into four parts by a golden cross. In the center of this cross is the Santa Maria, Columbus' ship. A British lion on a red field is shown in the upper left and lower right sections of the shield, with a golden crescent moon out of which a lily grows in the upper right and lower left sections. Above the shield there is a golden crown, topped with a garland of Bougainvillea branches. Within the garland are seven red roses, which stand for the seven communities of Grenada.

Holding the sign are an armadillo in front of a corn stalk; on the other side a Grenada Dove in front of a banana plant. The base represents grassland mountains and Grenada's Grand Etang Lake. A ribbon displays the national motto: "Ever conscious of God we aspire, build and advance as one people."