The flag of the Caymans was officially adopted in 1959.

As a British dependent territory the islands fly the United Kingdom (UK) flag. 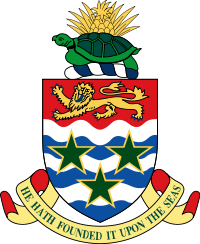 The Cayman coat of arms displays the Lion of England and features three stars that represent the three main islands. The blue and white wavy lines represent the sea. The coat of arms is topped by a pineapple and turtle, symbolic of the indigenous fauna and flora.