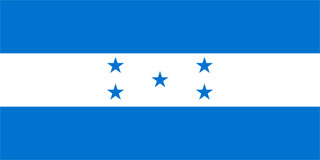 The flag of Honduras was officially adopted on February 16, 1866. The blue and white and the five stars represent the United Provinces of Central America, after they gained their independence from Spain. 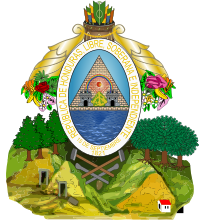 The Coat of Arms shows the triangle Coat of Arms of the Central American federation with a volcano between two golden towers in an oval. The towers stand for the defensive and independence of the country.

The triangle symbolizes equality and freedom, and behind it are a sun and a rainbow. Around the oval are the words "Republica de Honduras Libre, Soberana, E Independiente" meaning "Republic of Honduras, Free, Sovereign, and Independent". On the oval are two cornucopias and a quiver of arrows. The arrows symbolize the native inhabitants of the country. Under the oval is a landscape with oak and pine trees, and mining equipment - symbols of the natural wealth of the country.