The colors of gold and silvery-white are the colors of the keys of St. Peter's (the keys to heaven). The emblem centered on the white panel features those keys supporting the papal crown. The keys are tied together by a reddish rope. The flag, like that of Switzerland, is perfectly square. 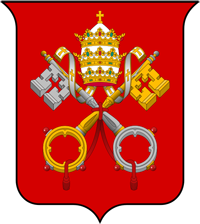 The Vatican coat of arms is a red shield containing two keys (blazoned gules) of silver and gold interlaced by the triple crown.

The keys represent the keys of heaven, while the triple crown represents the Pope's mission as "supreme priest, pastor and teacher."

Most Visited Museums In The World