Arundel Castle in Arundel, West Sussex, England is a restored medieval castle. It was founded by Roger de Montgomery on Christmas Day 1067. Roger became the first to hold the earldom of Arundel by the graces of William the Conqueror. The castle was damaged in the English Civil War and then restored in the 18th and 19th centuries.

From the 11th century onward, the castle has served as a hereditary stately home and has been in the family of the Duke of Norfolk for over 400 years. It is still the principal seat of the Norfolk family. It is a Grade I listed building.

In 1846, Queen Victoria and her husband Prince Albert visited Arundel Castle for a few days. Henry Charles Howard, 13th Duke of Norfolk had remodeled the castle in time for her visit. He was thinking of disposing of some of the 11th Duke of Norfolk's work, as there had been several complaints from the celebrities of the day that it was too cold, dark and unfriendly.

The Duke devised a brand new apartment block for the new Queen and her Consort, Prince Albert to stay in, commissioning a portrait of the Queen and decorating the block with the finest of Victorian furniture and art. There was also a re-structuring of bedrooms for the court. The Duke spared no expense to make the Queen's visit enjoyable, and he succeeded. 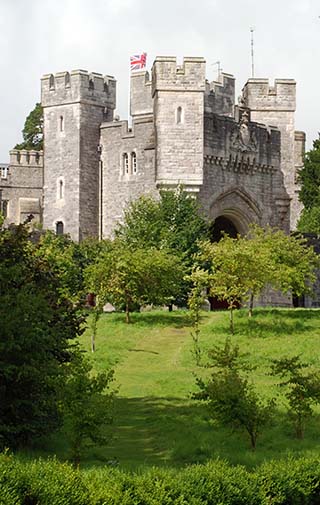 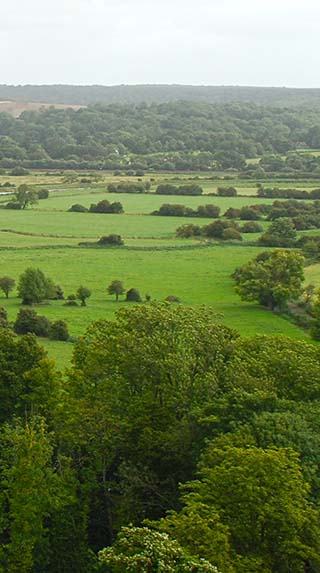 The castle provides beautiful views of the nearby River Arun, the South Downs, and the West Sussex countryside. 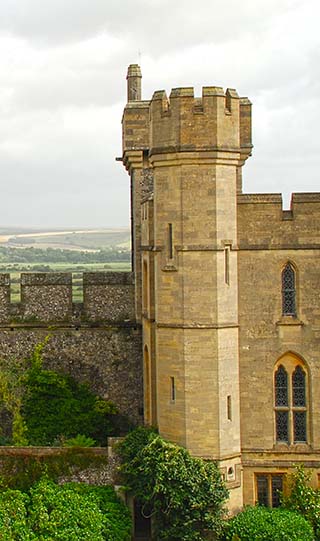 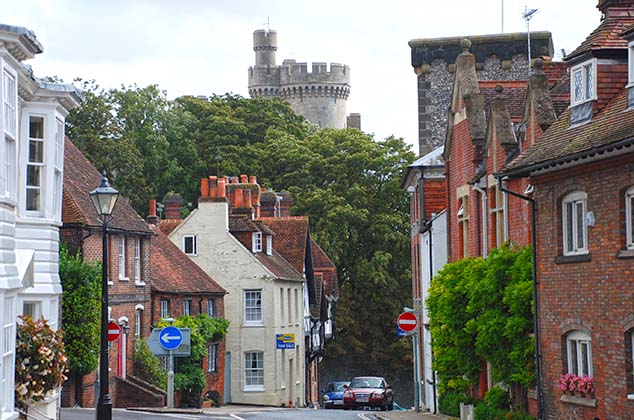 The historic town of Arundel is entirely dominated by its hilltop castle. Lying in the valley of the River Arun, just north of the English Channel, this little town is full of character and visitors will find themselves beguiled by its medieval charm. Once the site of a busy port, Arundel is now a premier tourist attraction in England and a designated conservation area. 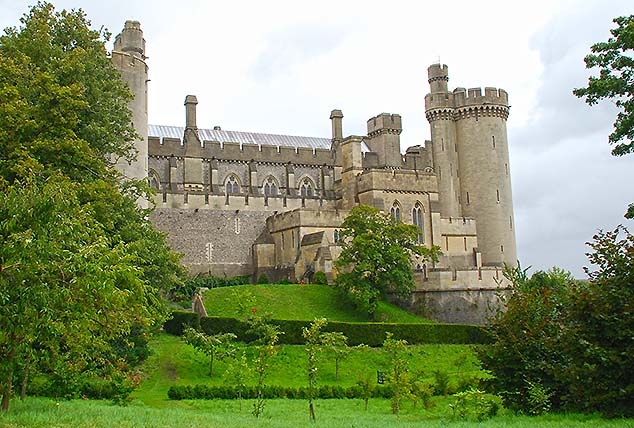 Arundel Castle is the seat of the Dukes of Norfolk and set in 40 acres of sweeping grounds and gardens. It has been open to visitors seasonally for nearly 200 years. It is one of the great treasure houses of England, and inside the castle are priceless works of art, including paintings and furniture, tapestries and stained glass, china and clocks, sculpture and carving, heraldry and armor, all in stunning room settings. 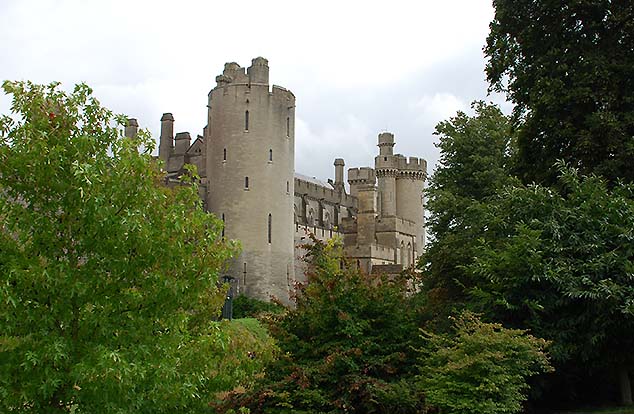 It's rather hard to believe that such an imposing edifice once showed the ravages that seven hundred years and the impact of cannon ball bombardments can wreak upon even the sturdiest structure, first by Royalists and later by Oliver Cromwell's Parliamentarian force. 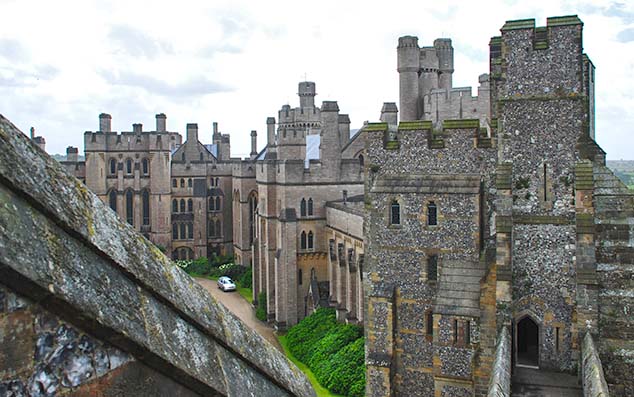 This is a view of the state apartments within the castle, the residences of the Duke and Duchess of Norfolk and their family, who still call Arundel home. 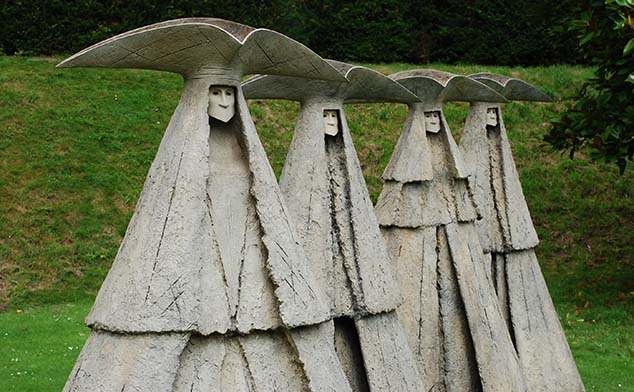 A series of imposing statues on the grounds of Arundel Castle, England 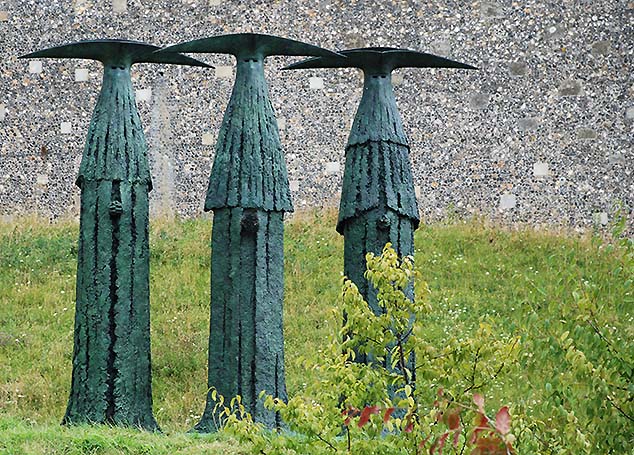 This trio of statues along the wall of Arundel Castle are quite haunting. 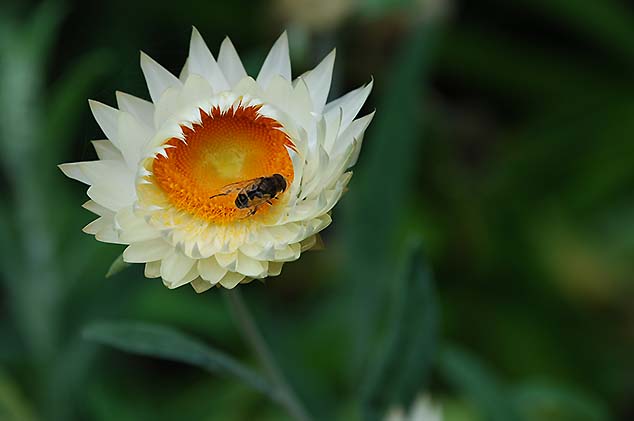 In the castle's garden, a bee and his favorite subject, 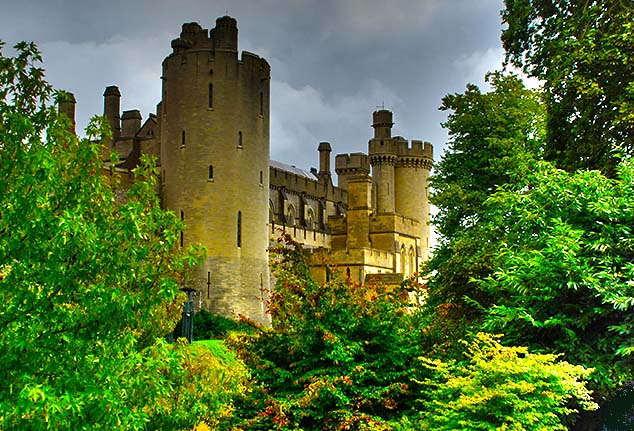 This is a view of Arundel Castle in the (HDR) high dynamic range. This process amplifies colors and shadows.