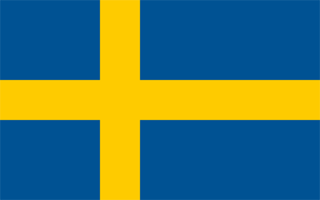 The exact age of the Swedish Flag is not known, but the oldest recorded pictures of a blue cloth with a yellow cross date from the 16th century.

The flag of Sweden was officially adopted on June 22, 1906. The design of the flag is probably taken from the Danish flag, and its blue and yellow colors possibly come from the Coat of Arms. 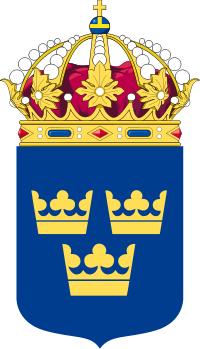 The Lesser Coat of Arms is the one more frequently used in Sweden today.

This colorful banner features three crowns of gold, two over one, topped by a bejeweled closed crown.

The three crowns have been, in one way or another, an emblem of Sweden since 1336, then used as a familiar symbol of the "Three Wise Kings."

An additional legend regarding its application is that King Magnus Eriksson (1319-64) adopted the three crowns to symbolize his title, "King of Norway, Sweden and all of Scania," - a southern province. 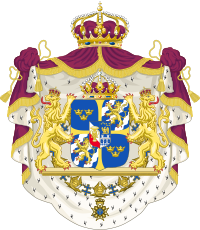 The Greater Coat of Arms represents Sweden's monarch, and is used on special occasions by the Government and by the Swedish Parliament.

Developed in the 1440's as the seal of then King, Karl Knutsson Bonde, it's been used ever since.

Sweden's national anthem is Du gamla, Du fria ("Thou ancient, Thou free"). The original title of the anthem was "Sång till Norden" ("Song to the North").

Richard Dybeck wrote the original lyrics to the anthem in 1844. The original beginning of the song was actually "Du gamla, Du friska" (Thou ancient, Thou hale). However, in the 1850s, Dybeck revamped the lyrics to turn into "Du gamla, Du fria" (Thou ancient, Thou free). Edvin Kallstenius, a Swedish composer, then arranged a melody that was originally from Västmanland. Even if the song was already printed in a handful of songbooks with the "friska" line, a priest that was friend's with Dybeck, told Carl Fredrik Lundqvist, an opera singer that's commonly associated with the anthem, about the lyrical change. From then on, songbooks with the "friska" lyrics weren't printed any longer.

The Swedish constitution doesn't make any mention of an official national anthem for the country, but Du gamla, Du fria is the widely accepted anthem that is used during ceremonial events. It was first recognized as a patriotic song during the 1890s, with its official status as Sweden's anthem being argued until the 1930s. A public radio company in Sweden, Sveriges Radio, started playing the anthem as their closer during the evenings, sparking its default recognition as the country's national anthem.

Even if it was believed that Du gamla, Du fria was adopted as the Swedish national anthem in 1866, no records of it being officially recognized is recorded. However, in 1893, King Oscar II stood up when the song was played, being a de facto recognition for the song. A committee in Riksdag rejected a proposal to finally make Du gamla, Du fria the official anthem of Sweden, dubbing it as "unnecessary". The committee then proclaimed that the song is already recognized by the Swedish to be the country's anthem, and that it is preferable if it remained that way instead.