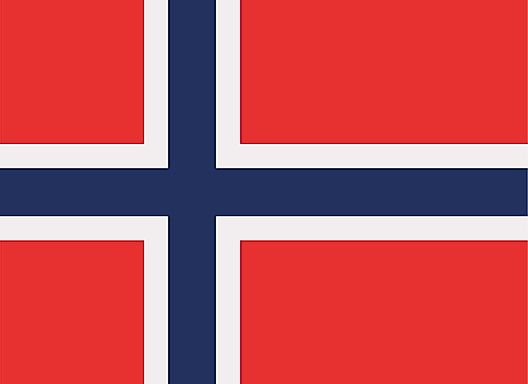 About 10,000 years ago, during the last Ice Age, Norway was covered by a (4 kilometer thick) layer of ice. When that ice finally retreated (or melted) its movement across the land formed many islands, and innumerable lakes and streams. It also etched out deep valleys that then filled with seawater forming Norway's fjords.

Subsequently, the exposed lands turned green and fertile, wildlife returned in large numbers, and early man arrived to hunt for food. Archaeological finds and ruins spread across Norway indicate that it was continually settled through the Neolithic Stone Age and Bronze Age.

Across Norway in the late 700's AD, a few scattered, independent communities (or kingdoms) had formed. The country's first ruler, King Harold Fairhair, united much of this rugged land and its people. Over time these rugged, sea-going adventurers (known as Vikings) began to raid and colonize many areas of Europe, with their main focus the nearby British Isles.

Accomplished sailors, the Vikings explored the North Atlantic Ocean, settling in Greenland and Iceland. Leif Eriksson, born in Iceland, is widely considered the first European to explore the coast of North America, coming ashore in Canada at the dawn of the 11th century.

In 1015, Olaf II Haraldsson, declared himself King of Norway after returning from war with the Danes. In time, he converted his people to Christianity, and is now revered as Saint Olav, the patron saint of Norway.

In 1018, Canute the Great, King Harald's brother (and a former Viking warrior) was the King of England and Denmark. He returned to Norway, captured it and placed his son in charge. Canute died in 1035 and Viking history would soon come to an end.

In 1066, with a reported 300 ships and thousands of men, King Harald Hardrada invaded England. The Battle of Stamford Bridge would prove to be a disaster; King Hardrada was killed in battle, Norwegian losses were considerable and less than 25 ships returned to Norway. The glorious Viking Age was over.

For the next 200 years, or so, Norway experienced a long series of personal land and power disputes, as well as civil wars, all fought between rival kings and those wanting to be King of Norway.

In the middle of the 13th century Greenland and Iceland were incorporated as dependencies, and Oslo was blossoming as Norway's power center. All bets were off by the 1350's as the Black Plague, the planet's most devastating pandemic, killed millions in Europe and much of Norway's population.