The Malta flag was officially adopted on September 21, 1964.

The flag of this island nation uses the traditional red and white colors of the Knights of Malta. The George Cross (upper left), outlined in red, was added to the flag in the 1940s, as King George VI of Britain presented it to islanders for outstanding gallantry during World War II. 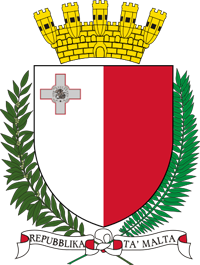 Malta's coat of arms is composed of a shield displaying the national flag, and is surrounded by an olive and palm branch (both symbolizing peace).

Above the shield rests a golden crown containing a port with five turrets depicting Malta's forts, and below a white ribbon displays the text, "Repubblika ta' Malta." ("Republic of Malta")

The 25 Best Governments In The World