As the largest island in the Dodecanese Islands, and the capital of the archipelago, Rhodes is inundated with tourists each year, especially in the spring and summer months.


The island's significant attractions include the ancient walled city section of Rhodes Town; the Acropolis at Lindos; unspoiled beaches along its eastern shoreline; impressive castles built by the Knights of Saint John; remnants of the Byzantine and Roman empires; dozens of hilltop churches and monasteries; classic medieval architecture and dependable pleasant weather.

Rhodes is reached by air from many destinations throughout the Mediterranean, and also by ferry from most coastal cities and islands in Greece, as well as ports in Turkey and the Middle East. 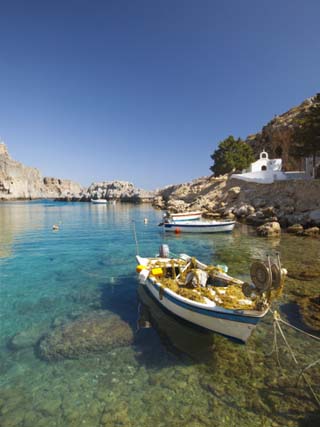 Agios Paulos Church and Fishing Boats...
by Sakis Papadopoulos
Buy This at Allposters.com