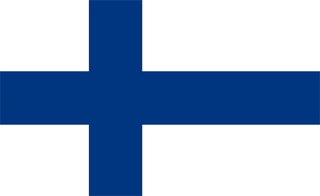 The current flag of Finland was officially adopted on May 29, 1918.

The off-centered blue cross is based on the Scandinavian Cross, a cross widely used on Sandinavian country flags. The blue color is symbolic of blue skies, and the thousands of lakes in Finland. The white represents the winter snows. 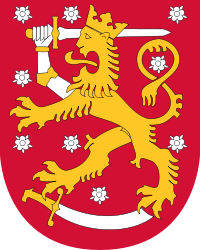 The original design first appeared in the 1580's on the monument of Gustav Vasa in Uppsala cathedral. It was later adopted by the newly independent Finland as its national arms in 1917.

The official description reads, "A crowned lion rampant on a red field holding a raised sword in an armoured hand replacing the animal's right front leg, and trampling a sabre with its hind legs; the lion, the crown, the hilts and the joints of the armour being in gold, and the blades of the weapons, and the armour itself being of silver; nine silver rosettes being scattered in the field."

Finland's national anthem is Maamme (Finnish) or Vårt Land (Swedish) which translates to "Our Land".

Despite having no law that officially declares Maamme as Finland's national anthem, it is generally accepted by the mass populace to be the country's anthem. The first performance of Maamme was on May 13th, 1848 by a group of students. The anthem has 11 stanzas in total and usually, only the first and last are sung.

Fredrik Pacius, a German immigrant, was responsible for the composition of music for the anthem, with Johan Ludvig Runeberg provided the original Swedish lyrics. The current Finnish lyrics are commonly associated with Paavo Cajander's Ensign Stål's 1889 translation. However, the lyrics actually originated from a translation for the piece made by Julius Krohn in 1867.

Maamme is met with some criticism due to the fact that it was composed by a German, and the lyrics were originally written in Swedish. Due to this, Finns have questioned as to why it is used as the Finnish national anthem.

There have been proposals to recognize an alternate anthem, Jean Sibelius' Finlandia, with Finnish lyrics by V.A. Koskenniemi and Swedish lyrics by Joel Rundt. Critics have claimed that Finlandia is difficult to sing and the song should be appreciated as a simple musical piece.

Oh our land, Finland, land of our birth,

rings out the golden word!

No valley, no hill,

than this northern homeland,

precious land of our fathers.

Your splendour from its shell

one day will bloom;

From our love shall rise

and once your song, fatherland