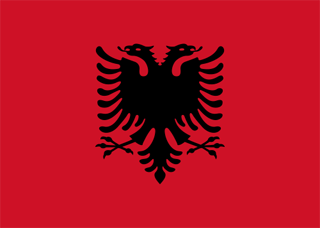 The Albania flag was officially adopted on April 7, 1992.

The flag features a double-headed eagle in black, on a red background. This design is traced back to Skanderbeg (Gjergj Kastrioti), an Albanian Christian, and a 15th century Turkish general. He used the Byzantine two-headed eagle on his seals, hence the Albanian flag. Note that Albanians call their country Shqipëria, meaning "Land of the Eagle." The flag was adopted in 1912 when Albania gained independence from the Ottoman Empire and again in 1992 after the collapse of the communist government and the rise of the fourth Republic of Albania. 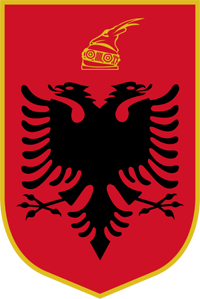 An adaptation of the flag, Alabania's coat of arms consists of a two-headed eagle with the helmet of Skanderbeg hovering above.