The flag of United Arab Emirates was officially adopted on December 2, 1971.

The flag features the Pan-Arab colors of red, green, white and black, which are colors symbolic of Arab unity. In addition, other color references include green representing fertility; white representing neutrality, and black the incredible oil wealth within its borders. 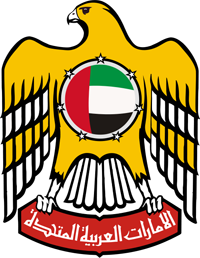 The emblem of the United Arab Emirates was adopted in 1973, and is composed of a golden falcon holding onto a red parchment depicting the name of the country in Kufic script.

Centered on the falcon's chest is a disc representing the national flag.