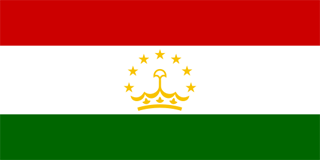 The flag of Tajikistan was officially adopted on November 24, 1992.

Tajikistan's flag still displays colors from its original republic flag, when it was a part of the former Soviet Union. Red is from the Russian flag; green is symbolic of its agricultural products, and white represents the cotton crop. The centered crown with seven stars is said to represent the country's independence. 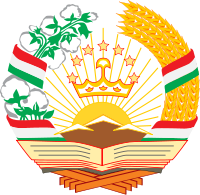 The emblem of Tajikistan is composed of the Pamir Mountains surrounded by cotton on one side and wheat on the other, both wrapped in a banner displaying the national colors. A crown hovers above the mountains, and a book makes up the base.