The Maldives, a group of about 1,200 islands, separated into a series of coral atolls, is just north of the Equator in the Indian Ocean. Only 200 of the islands are inhabited. It has a population of 393,988 and celebrates their National Day on July 26th.

Many of these tropical atolls and islands are simply gorgeous, with swaying palms, white sandy beaches and deep-blue lagoons; none of the islands rise higher than 7.8 ft. above sea level.

These low-lying specs of coral are subject to erosion, and stand at the mercy of any sea level rise. Some were severely damaged during the December 2004 Tsunami.

The culture of the Maldives as we know it today, developed and flourished sometime around the 3rd century BC, as a 1,400 year-long Buddhist period cemented a foundational importance in the island's history.

Due to its strategic location, the Maldives aroused the interest of Middle Easterners, and by the 10th century AD trade routes were established and Islam was introduced to the region.

Despite being ruled by an independent Islamic sultanate for centuries, the Maldives were taken over by the Dutch in the mid-17th century, and later, were driven out by British forces some years later.

As a British protectorate, the Maldives were given military protection, and non-interference in local administration.

At the emergence of a proposed constitutional monarchy, conflicts erupted, and the people of the Maldives pushed for independence.

The Maldives successfully gained their freedom from the United Kingdom in 1965, and three years later, declared itself an independent republic. 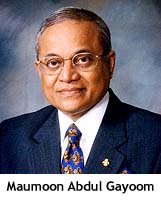 In 1978, Maumoon Abdul Gayoom was elected president, and a period of political stability flourished along with an increase in tourism and increased foreign contact.

In spite of the booming economy, Maumoon Abdul Gayoom's presidency was seen as controversial, and a series of coup attempts throughout the 1980s were attempted.

Additional riots in the capital city of Malè during August 2004 garnered worldwide attention, and prompted the president and his government to pledge much needed democratic reforms, including a more representative political system and expanded political freedoms.

In 2008, President Gayoom stepped down as Mohamed Nasheed won the presidential election. Nasheed encountered several challenges as a new president, including a massive debt, economic instability as a result of the 2004 tsunami, and unemployment to name but a few.

Social unrest prevailed over the next couple of years, and on February 7, 2012 Mohamed Nasheed stepped down, blaming a coup for his resignation. Later investigations dismissed the claims of a coup and a summary report said he resigned voluntarily.

Vice President Mohammed Hassan was sworn in as president, and in March 2012 the new regime declared that a previously proposed election (one to decide a new president) would not be held.

Throughout the past few decades the Maldives has transformed itself into a popular fishing, scuba diving, surfing and exotic resort and spa destination.

The Maldives has pledged to become a carbon-neutral country by 2019.

Efforts continue to reclaim (solid ground) from the shallow waters of the surrounding reefs, but its precarious elevation above sea level is an on-going concern for all who call this beautiful place home.