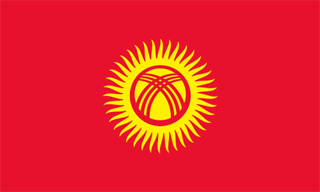 The flag of Kyrgyzstan was officially adopted on March 3, 1992.

In 1991, Kyrgyzstan became the very last of the former Soviet Union republics to secede, and declare independence.

Its new flag is symbolic of Manas the Noble, a true national hero.

Manas merged together 40 tribes that collectively formed the original Kyrgyz nation. That accomplishment is represented by the red field and the golden sun with 40 rays. Centered within that sun is a symbolic Kyrgyz yurt, the traditional home of it nomadic peoples. 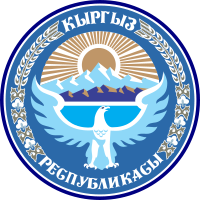 The emblem of Kyrgyzstan was adopted in 1992.

The emblem consists of a sun rising above a mountainous scene resting on the shoulders of a hawk.

Cotton and wheat circle the border of the emblem, with the name of the country scripted above and below.

The lighter shade of blue is symbolic to the country as the color of courage and generosity. The wheat, cotton and rising sun are leftover elements of the USSR.