The flag of China was officially adopted on October 1, 1949.

The red of the Chinese flag symbolizes the communist revolution, and is also the traditional color of the people.

The large gold star represents communism, while the four smaller stars represent the social classes of the people.

The five stars together reflect the importance placed on the number five in Chinese thought and history. 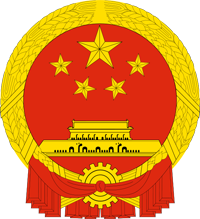 China's national emblem is composed of the entrance gate to the Forbidden City in Beijing, with five stars above it representing the Communist Party of China and the four social classes.

Sheaves of wheat and rice form the edges (symbolizing the agricultural revolution), and a cog wheel (representing industrial workers) makes up the base.