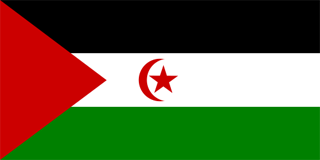 Due to the dispute of its sovereignty there is currently no official flag for the Western Sahara.

However, the flag of the Sahrawi Arab Democratic Republic (shown above) is flown over much of the region, and is widely considered to be the flag of Western Sahara.


There is currently no coat of arms for the region of Western Sahara.

The Most Expensive Coins Ever Sold