The flag of Equatorial Guinea was officially adopted on October 12, 1968.

The blue triangle represents the sea, the green represents the country's farmland, and red symbolizes the country's independence. A silk cotton tree is centered on a silver shield. The six gold stars above that shield reflect the six parts of the country. The national motto "Unity, Peace, Justice" is displayed below the shield. 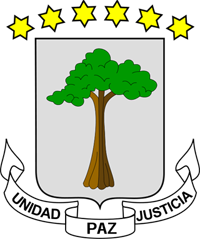 The coat of arms of Equatorial Guinea is composed of a silk cotton tree (or the so called God tree) against a grey shield. The six six-pointed stars above the shield represent the five main islands, and the national motto is displayed below.