The Congo flag was officially adopted on November 20, 1959. It features red, yellow and green, the official 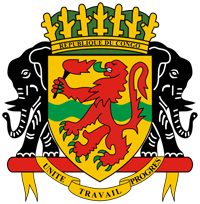 The Republic of Congo coat of arms displays a shield with a red lion rampant supported by two African elephants.

The national motto "Unité Travail Progrès" ("Unity, Work, Progress") is displayed on a banner draped below the elephants, and a golden crown sits above the shield.