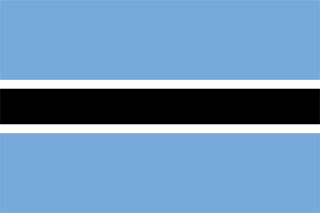 The Botswana flag was officially adopted on September 30, 1966.

The colors on the flag correspond to those on the national coat of arms. The blue represents water, the white-black-white bands depict the racial harmony of the people as well as the pluralist nature of the society. They are inspired by the coat of the zebra, the national animal. 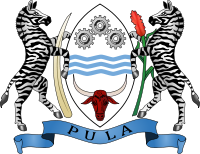 Botswana's coat of arms was adopted on January 25, 1966, and contains a shield supported by two zebras. The zebras hold onto a tusk of ivory (symbolic of the former ivory trade) and an ear of sorghum (an important crop to the nation. Within the shield are three cogwheels representing industry, three waves symbolizing water, and the head of a bull to depict the importance of cattle herding.

The national motto "Pula" ("Rain") is displayed on a ribbon below.