Despite their iconic presence, the world’s giraffe populations are in trouble. And it’s probably more trouble than you think.

There are few animals more distinct than the giraffe. An enigma of sorts, they are a species riddled in contradiction. They are at once massive yet gentle, both lanky and majestic. They are the tallest terrestrial mammal on Earth by a wide margin. There is a long list of adjectives that could be used to describe giraffes. Unfortunately, since 2016, one of them is “vulnerable”.


If this comes as a surprise to you, consider a few facts before you feel ignorant. In the not so distant year of 1980, over 150,000 giraffes were reported to live in the wild. In 2008 and 2010 respectively, two species of giraffe, the West Africa giraffe and the Rothschild’s giraffe, were listed as endangered by the IUCN. The decline in giraffe populations has been quick and recent: over the past three decades alone, giraffe numbers have dropped nearly 40%. Today, the giraffe population is estimated to be fewer than 100,000. There is no doubt that populations are in decline, and the decline is serious. It is what famous British naturalist Sir David Attenborough has famously referred to as a “silent extinction”.

The situation is stark enough that it begs the question: what in the world happened?

Giraffe are synonymous with Africa, and rightly so. Their endemic range sprawls across the continent. Per the IUCN Red List, giraffe populations are native to countries as far north as Niger, and to countries as far south as South Africa (this is a range of roughly 5,500 km - further than the distance between New York and Los Angeles). However, a widespread population does not automatically denote a population that is large in number. Out of all countries where they are native, all species of giraffes (recent research suggests that there are four) are now said to be extinct in the country of Mali, as well as in Eritrea, Guinea, Mauritania, Nigeria, and Senegal. 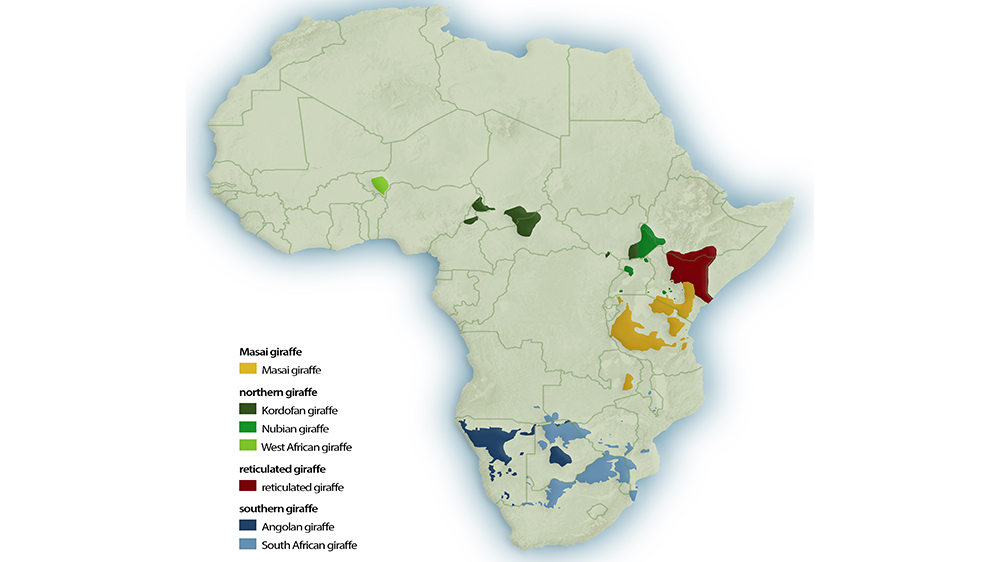 A map showing the distribution of giraffes across Africa. Courtesy of the Giraffe Conservation Foundation.

Giraffes are mammals, most closely related not to a horse or a cow but to the okapi, an obscure solitary animal who also lives in Africa and is the giraffe’s only extant cousin. The tallest recorded giraffe was a staggering 5.88 meters tall (nearly 20 feet). Giraffes see in color, and have strong senses. They can close their nostrils. No two giraffes share a coat pattern. They are unique animals in all ways imaginable.

Giraffe Vulnerability: How Much Are Humans to Blame?

Though giraffes have generally been held in high esteem by humans - often given affection nicknames like “gentle giants” – it is a respect that is not always mutual.

For a creature so grand in stature, giraffes do surprisingly well when paired with other animals. However, this is not to say that giraffes are free from danger in their wild habitats. Natural predators such as lions, leopards, African wild dogs and hyenas may attack a giraffe, particularly if they are in a vulnerable position such as leaning down at a water hole to drink.

However, when it comes to the population degradation currently being witnessed, other animals are not the problem. Lions and leopards are not who are most to blame for giraffe population loss. If we are in the business of pointing fingers, there is one predator whose behavior is undeniably threatening giraffe populations: humans.

It’s easy to place the blame on “humans” in a blanket statement, but this is of course an oversimplification of events. The following are just some of the main factors affecting giraffe populations today.

Giraffes are animals born to roam. Male giraffes spend a great amount of their life in a solitary manner, perusing the plains for a female to mate with. In addition to grazing, giraffes love wide open plains that offers plenty of room to move about and feast on leaves, of which they eat up to a staggering 34 kilograms (75 pounds) of a day. Despite their massive size, giraffes are herbivores, subsiding primarily on high resting leaves which act as both a source of nutrients and as a water source (thanks to a well-adapted digestive system, giraffes seldom drink water). As urban development continues, and the need for agriculture land increases, the habitat of the giraffe continues to be threatened. This is an especially important point, as the UN predicts that population growth in Africa will continue to accelerate in the near future.

It is important to note that it would be unfair to solely place the blame on local human populations. Humans are complicit on a much wider world-sized scale. In recent years, conservations have been urging the United States Fish and Wildlife Service to list the giraffe under its umbrella of “endangered species” - their website currently lists the giraffe as "under review".

In an irony so often seen in animal conservation, it is the species’ destroyer who also may be their strongest hope.

Much of what we know about giraffes today, and how we can protect them, we know because of the Giraffe Conservation Foundation.

The world’s only NGO solely devoted to giraffes, the Namibia-based Giraffe Conservation Foundation (or GCF) is run by a team of biologists, conservationists, and wildlife experts. The GCF runs conservation programs in 14 countries throughout the continent, which range from educational programs for children, to taxonomy research, to providing expert advice and technical support, to an initiative called World Giraffe Day, which is set, by the way, for June 21st – the longest day for the tallest animal. One of the most endearing projects available through the GCF is the opportunity for anyone around the world to “adopt a giraffe”. Beginning at just 50 US dollars, donors receive a picture of their adopted giraffe, as well as quarterly reports on the adoptee.

World Atlas had the opportunity to speak to Stephanie Fennessy, one of the directors of the Giraffe Conservation Foundation. She had the following to say:

“The Giraffe Conservation Foundation (GCF) is the only organisation in the world that concentrates solely on the conservation and management of giraffe in the wild throughout Africa. Our focus is on conservation actions to save giraffe in Africa. While we adopt a science based approach, we do no longer have the luxury of time to try and understand everything about giraffe, if we do not act now, it may well be too late. But it is also important to point out that giraffe conservation is not all doom and gloom – there are many positive examples and developments. So, let’s all work together to save giraffe in Africa before it is too late.”

Like many conservation efforts, awareness and charity is instrumental in saving the vulnerable giraffe population. For inspiration, we can look to situations like the rhino populations, or the tighter regulations that were adopted to prohibit the trade of ivory, or even the bounce back of once-endangered panda, which have been on the rise. However, for every happy story, there is one less uplifting, such as the recent 2011 extinction of the western black rhinoceros. For giraffes, though the situation is very dire, it’s very possible that it is not already too late. It is an outcome that is in our hands.

To adopt-a-giraffe or donate to the Giraffe Conservation Federation, or to learn more about how they are helping the giraffe conservation effort, visit their page here.

Rachel Cribby is a writer, editor, and lifelong giraffe lover based in Montreal, Canada.