Toronto is home to a network of deep ravines. The unusual mix of dense city and thick forest often surprises visitors from around the world. Ravines serve as a serene retreat for city residents away from the hustle and bustle. The system sits on more than 10,500 hectares to become the largest of its kind in the world.

History Of The Ravines Of Toronto

Toronto’s river valleys began forming approximately 12,000 years ago, at the end of the last ice age. The ravines have been occupied by humans from as early as 9,000 BCE. As the ravines were unsuitable for agriculture, logging was developed in the region in the 19th century instead. Early European settlers relied on power generated from the system’s rivers to power mills. The Don Valley, the largest ravine in the system, witnessed the most industrial development in the system. A concrete channel was constructed on the valley’s southern region to mitigate flooding and encourage industrial development. The system soon became an industrial and residential dumping ground to the point where the health of the rivers was significantly affected. It has taken legislation and concerted efforts to restore the ravines back to their wild state.

Description Of The Ravines

About 17% of the city of Toronto is covered by the ravine system. The system makes for a spectacular landscape comprised of forests, rivers, creeks, streams, beaches, and parkland. It stretches through several residential neighborhoods. The system is home to golf courses, roads, parks, trails, cemeteries, and hydro corridors. The system supports a variety of wildlife from herons, deer, butterflies, mallards, and coyote as well as trout, tadpoles, and salmon in the wetlands.

The ravine system of Toronto is divided into four major ravine groups spread out from three rivers (the Don, Rouge, and Humber), and one creek (the Highland Creek). In addition to these major groups, there are other smaller ravines spread across the city. The Don Valley stands out as the largest and most prominent ravine although its lower region has been developed extensively. The Don, Rouge, and Humber Rivers meet close to where Bathurst Street and Jefferson Sideroad intersect. Two smaller ravines, the Mimico and Etobicoke Creeks, are notable for their long valleys. 60% of the ravines system’s ownership belongs to the public while 40% is owned privately. 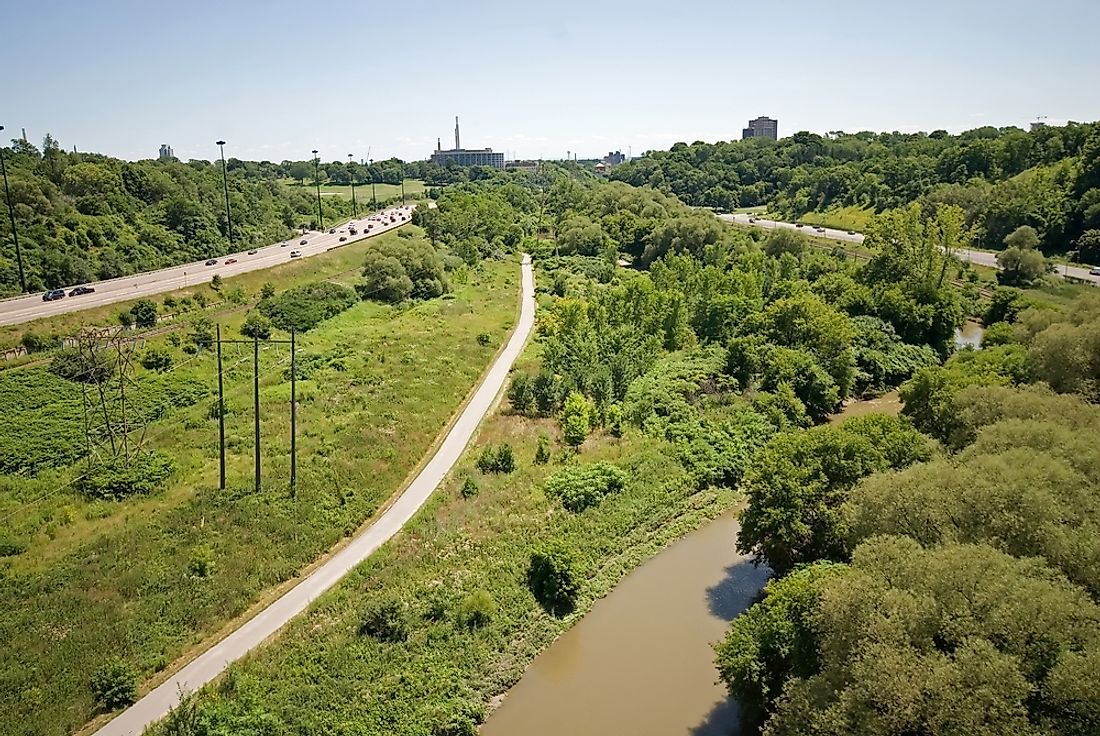 The city of Toronto has implemented efforts to reverse previous environmental damage to the ravines and conserve the existing natural environment. Factors such as unleashed dogs and invasive animal and plant species have been identified as threats to the natural habitat. The dumping of garbage in the valleys has yet to be fully prevented. Other concerns such as wildlife disturbance and erosion have been attributed to human activities including cycling and hiking. The ravine protection is drawn out by legislation. Since 2015, various city divisions have been collaborating to develop a Ravine Strategy. The Strategy is projected to direct efforts to the system’s management and conservation in the context of increasing population, climate change, and urban development. The strategy will identify priorities for investment and direct planning and policy on matters relating to the system’s conservation.

Are There Ravines in Toronto?

About 17% of the city of Toronto is covered by the ravine system. The system makes for a spectacular landscape comprised of forests, rivers, creeks, streams, beaches, and parkland. It stretches through several residential neighborhoods.

The Unique Ravine System of Toronto