Also known as "scaly anteaters", pangolins are unique mammals that live in Africa and Asia. They are best known for their overlapping scales that are soft and supple in childhood but become large and hard in adulthood. The main component of these scales is keratin, the same material that is found in human hair and nails. They are also recognizable by their unique movements and appearance. Unfortunately, these scaly animals are among the world's most trafficked and most endangered animals, mostly due to the thriving illegal trade industry.

There are eight species of pangolin, half of which live in Asia, and half in Africa. All species are either endangered, critically endangered, or vulnerable.

In spite of its name, this species can be found across many Asian countries, including India, Nepal, Bangladesh, Myanmar, Bhutan, Taiwan, and of course, China. This species is critically endangered and is, in fact, one of the most endangered of all listed species. Much of their population decrease has occurred in the past 15 years. The main reason behind this is poaching.

The Chinese pangolin is shy, elusive, and extremely non-aggressive. They are capable of climbing trees, though they rarely do. The species is unique for its ears that stick out, and for the scales that cover its head.

Known as the Malaysian, Sunda, or Java pangolin, this species is found throughout Southeast Asia. It is notable for its affinity for trees, where it spends the majority of its life. It differs from its Chinese counterparts by being larger and lighter in colour, as well as for the possession of its short claws. These claws are used to dig for ants and termites.

Another Asian species, the India or thick-tailed pangolin is mostly found on the Indian subcontinent where it prefers to live in the forests. Although this species does not climb trees, it prefers to live amongst the low shrubbery of the forest floor. The species is classified as endangered and is threatened by illegal poaching.

This species is exclusively found in Palawan in the Philippines. Although it has a healthy presence within the province, it is still classified as danger due to the threat of hunting. It is similar to the aforementioned Sunda species but can be distinguished by its smaller frame and head.

The most common of all African species, the white-bellied pangolin is small compared to its counterparts. It is found throughout much of west-central Africa. This species is incredibly skilled at climbing trees, which leads to it sometimes being referred to as a “tree pangolin”.

The largest of African pangolins and the largest of all eight species, this species can be found throughout West Africa, and as far east as Uganda. Due to the nocturnality of the species, as well as its quickly-declining population, there is not much known about them.

Another example of ground-dwellers, this species is the only one found in southern and eastern Africa. It is found in up to 15 countries in low numbers, as it is greatly threatened by loss of habitat as well as poaching. This species is known for the yellow hue of its scales.

Found in limited areas in West Africa and Central Africa, this species prefers to live in trees. However, they are also very capable swimmers. They generally have between 9 to 13 rows of scales. This species is unique for having some daytime activity. Unfortunately, this species is also under threat by human behavior and is currently listed as vulnerable.

All types of scaly anteaters are insectivorous, which means that their diets mostly consist of insects. They especially love to feast on termites, ants, and to a lesser extent, larvae. In order to find a meal, they depend heavily on their sense of smell and hearing because they have a poor sense of vision. They have strong front claws on their legs that they use to dig around in the ground to find prey. Their long tongues also assist them in probing inside tunnels for insects. As these animals do not have teeth, they ingest small stones that help them in grinding up insects in the stomach. They have also been known to hang from tree branches to remove bark from the trunk, which exposes the nest of insects inside. 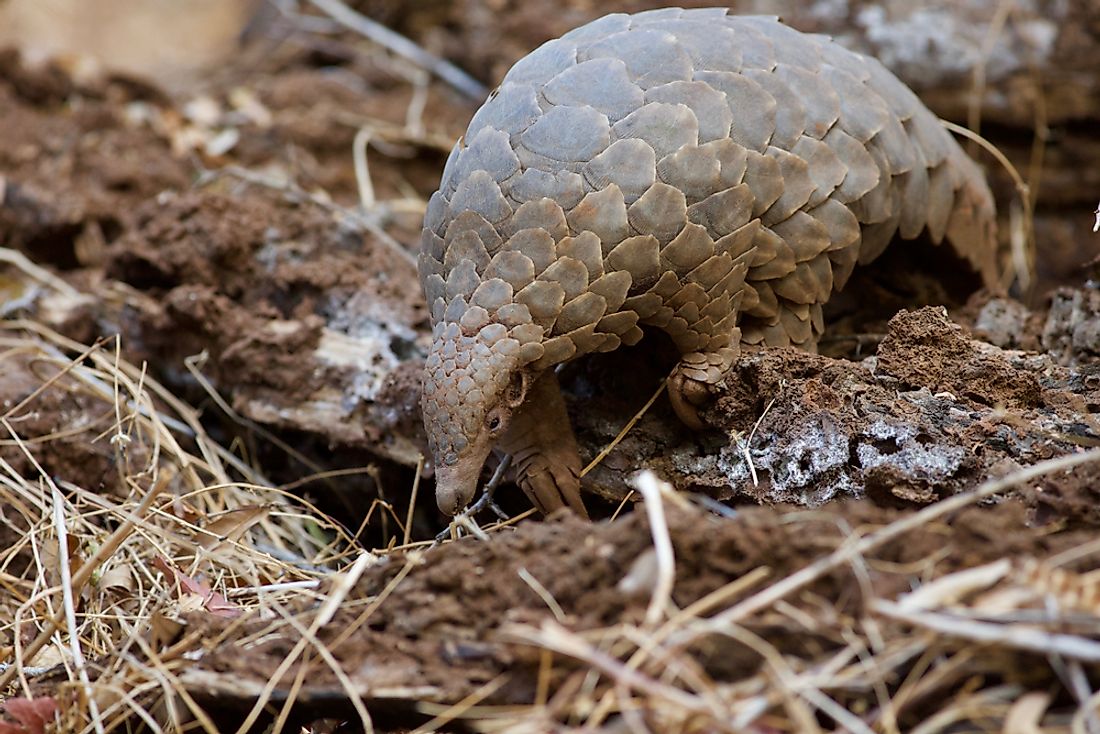 Believe it or not, pangolins are known for being picky eaters. They will generally only eat one or two types of insects, despite the fact that they may have access to hundreds of options. In order to sustain themselves, they must eat hundreds of grams worth of bugs every day!

The behavior of this animal is almost as quirky as their appearances. Pangolins are nocturnal and are rarely seen during the day, with the exception of the long-tailed species which can sometimes be spotted during daylight hours. All species sleep by curling into a circular ball.

Pangolins do not have a very good sense of sight, but what is lacking in the vision department is made up for with their highly attuned sense of smell. It is this strong scent ability that allows pangolins to seek out their food, as they can locate insects by their smell. Their sharp claws aid them in digging for insects, as do their long tongues.

Scaly anteaters can either be tree-dwelling or dwell underground, depending on the species. All species are generally very good swimmers and are known for their ability to walk in the bipedal position. All species have historically been very hard to observe and collect data on.

Although it is commonly stated that pangolins reproduce by laying eggs, this is untrue. Pangolins are mammals, and their reproduction cycle mirrors that of other mammals in the world.

All species exhibit sexual dimorphism, with males being up to 50% larger than females. As they are incredibly solitary creatures, they only interact with one another during mating. Mothers carry their young for around 140 days. The baby will have very soft scales that will eventually harden over time. While in their infancy, babies will travel on the backs of their mothers. They stay close to their mothers until they are around 2 years of age.

Where Do Pangolins Live? 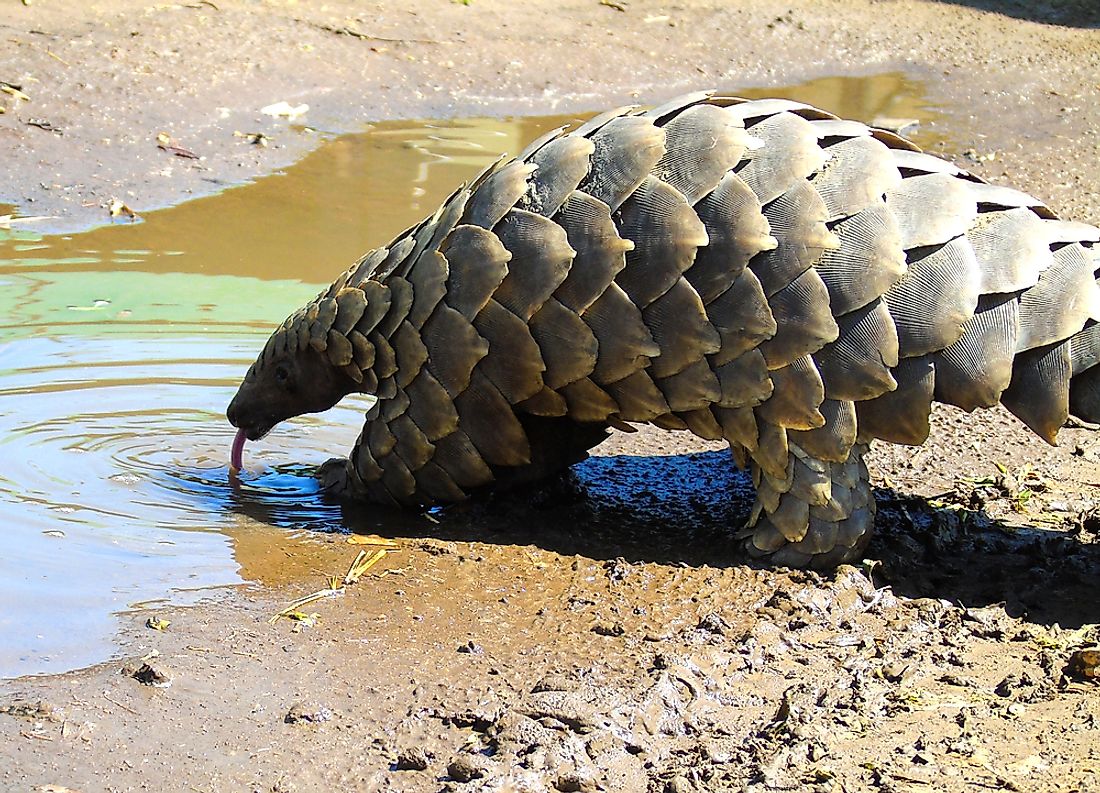 Of the eight extant species, four are found in Asia and four in Africa. They live mostly in sandy soils where they can easily burrow to get food. They dig underground tunnels that measure up to 3.3 meters (11 feet) deep.

All species curls up into a ball whenever it perceives a threat, an ability that generally helps keep the animal safe from large predators. This is because its overlapping scales act as armor. Other unique characteristics of their bodies is that they have short legs and very sharp claws. Their tongues are very long and are designed for catching insects.

Unfortunately, pangolins are the most poached animal in the world. This is because their meat is considered a delicacy and their scales are also used in some traditional medicine practices. The high demand for meat and scales leads to its illegal trade. Pangolins were previously thought to be related to the armadillo – however, new research suggests that they belong to their own order called Pholidota. In many places where they live, pangolins are protected by law. However, these laws are not always easy to enforce.

There are several aspects of the pangolin’s body that make them specifically susceptible to predators. However, their bodies also have unique ways of fighting back. For example, while pangolins are unable to bite as they do not possess teeth, they are capable of using their sharp scales as weapons by curling up into balls, exposing the sharp edges of their scales to their enemies. Lions, leopards, and tigers are all natural predators in the wild. However, there is one species whose imposing threat reigns high above others: humans.

Why Are Pangolins Trafficked?

Pangolins are often killed and used for bush meat, and are in fact considered to be a delicacy in some places. Their bodies generally sell for a high price on the black market which encourages the trading of these animals.

Additionally, many body parts are often used in traditional medicinal practices. It is believed that their body parts, including their scales, have healing properties. Although scientific studies disprove these beliefs, poaching of pangolins remains persistent as the species spirals closer to extinction. In 2011, up to 60,000 pangolins were taken from the wild by hunters. Around 300 pangolins are stolen from their wild habitat daily.

In conclusion, here are some amazing facts about “scaly anteaters”:

This page was last updated on September 4, 2018.
By Victor Rotich

Where Do Pangolins Live?