Kelp forests are submerged forests or zones that have high concentrations of brown seaweed (or kelp). Kelp forests are regarded as one of the world’s most vibrant and fruitful ecosystems. The forests exist all over the world, from temperate oceans to Polar Regions.

The forests serve important benefits to human beings and marine life due to their diversity in functionality and structure. This crucial importance is in spite of the fact that kelp is not the most diverse in terms of taxonomy. In the optimal conditions, it is possible for the forests to grow up to 18 inches in one day.

Kelp relies on photosynthesis for food and nutrient production. For this reason, these forests typically grow in open waters that are shallow with depths ranging between 49 and 131 feet. Most of the leaves that form the canopy of the forest will always be seen on the surface of the water where they have access to the sun. The canopies also tend to flourish in cold waters that are full of nutrients. 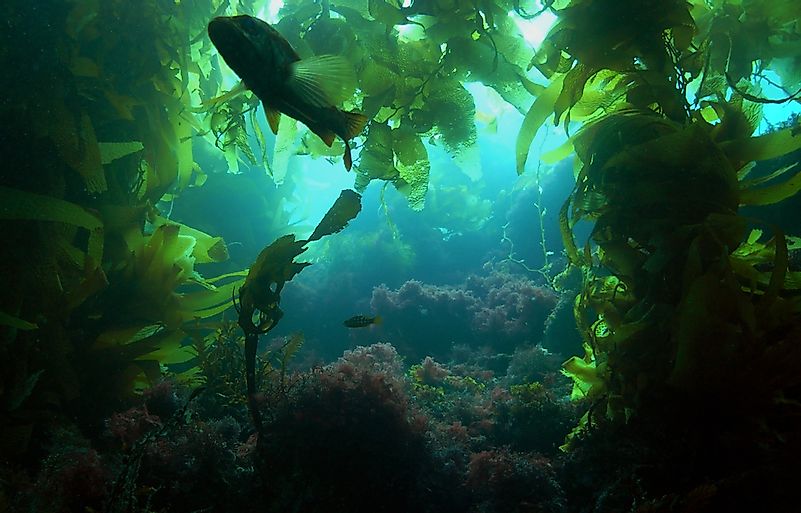 The most apparent significance is the provision of shelter, food, and protection for hundreds of marine species such as fish. The thick blades of the plants provide the perfect hiding spots from predators. Some of the animals using the cover include snowy egrets, cormorants, gulls, terns, sea lions, sea otters, whales, seals, and others.

Kelp forests have also served an important function in human survival for thousands of years. For instance, the canopies would act as a sort of buffer that protects ancient fishermen from rough weather conditions that may occur in the open waters. Further, the kelp canopies also served as a guide of sorts so as not to get lost.

In modern days, fisheries play important roles in the smooth functioning and growth of economies. A good example is when human beings harvest some of the species that form the kelp forests in order to feed fish species that are kept in custody. These fish species include rockfish and lobster. Aside from this use, humans are also able to harvest a substance known as alginic acid which is used in the production of products such as toothpaste. The vegetation also provides ideal conditions for recreational use such as kayaking and SCUBA diving.

Overfishing is arguably the most pressing and concerning threat facing these critical ecosystems. Overfishing will significantly reduce the number of a certain species thus diminishing that species’ ability to serve its purpose in the ecosystem. Consequently, the number of another species will shoot up and eventually strain the whole system. Other challenges include natural disasters, water pollution, climate change, and invasive species.

Due to the complexity of the forests, environmental managers have a hard time trying to maintain the biodiversity. Some of the strategies taken to preserve the forest include regulation of kelp harvesting and controlling invasive species.

This page was last updated on December 14, 2018.
By Ferdinand Bada